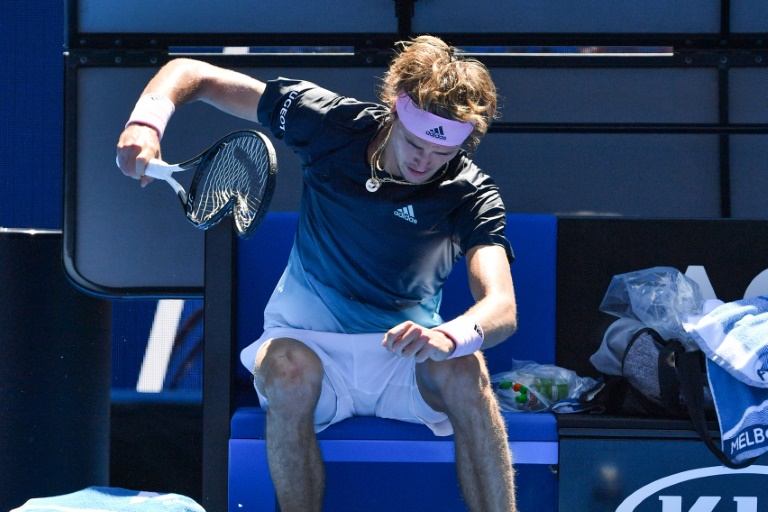 Alexander Zverev self-destructed Monday to slump out of the Australian Open at the hands of Milos Raonic, as Japanese US Open champion Naomi Osaka ground her way into an quarter-final with Elina Svitolina.

As the second week of the opening Grand Slam of the year got underway, the highly-rated German fourth seed lost the plot against the former world number three Canadian, crashing 6-1, 6-1, 7-6 (7/5)

Zverev has routinely been anointed as the flag-bearer for the next generation, but again failed to live up to his reputation and has now missed out on making the last eight of a major for the 14th time in 15 attempts.

So furious was he with his form, the 21-year-old had a major temper tantrum in the second set, whacking his racquet into the ground eight times to leave it a crumpled mess

"I just tried to stay composed and it worked out well for me today," said cool 16th seed Raonic, who made the semi-finals in Melbourne in 2016.

He will face Croat Borna Coric or Frenchman Lucas Pouille next. 'I was, like whoa' -

The victory left the bubbly 21-year-old with a last-eight clash against ambitious Ukrainian Svitolina, who battled past American Madison Keys 6-2, 1-6, 6-1.

It will be a new experience for whoever wins that showdown, with neither of them going beyond the quarter-finals at Melbourne Park before.

This contrasts with the massively experienced Serena Williams who has made the last eight or better 11 times on her way to seven Australian Open crowns.

Osaka beat Williams to clinch the title at Flushing Meadows last year. It propelled her to stardom, but she has been far from convincing at her first major since.

"I was watching all these kids winning. Last night (Stefanos) Tsitsipas beat (Roger) Federer and I was like whoa, and I decided I wanted to do well too," she said of rallying back.

Svitolina needed to dig deep to overcome 17th seeded Keys, a US Open finalist in 2017.

The turning point was a marathon 16-minute game early in the deciding set that went to deuce 11 times as Keys chased a decisive break.

But the American's resolve crumbled when Svitolina held off five break points then gained an advantage in the next game.

"I had to put my level up, I'm glad I handled the pressure," said Svitolina, who scored her biggest career win at the WTA Finals in Singapore last October.

"It was very hard because the sun was burning my eyes when I was tossing the ball, so I was very happy to win."

Svitolina was a quarter-finalist at Melbourne Park last year and has set her sights high after her breakthrough in Singapore, targeting a Grand Slam win and world number one.

Williams has looked in ominous form so far at Melbourne Park, dropping just nine games, as she seeks one more Grand Slam title to put her alongside Margaret Court's record 24.

But top seed Halep is a much tougher assignment at a tournament blown wide open with the ousting of defending champion Caroline Wozniacki and second seed Angelique Kerber.

French Open champion Halep struggled in her opening two matches, where she was extended to three sets in both, before finally hitting form to beat Serena's sister Venus in round three.

Six-time champion Djokovic was taken to four sets by teenage Canadian Denis Shapovalov in the third round and meets another young gun in Russia's Medvedev, seeded 15.

Whoever goes through will have a quarter-final against Japan's eighth seed Kei Nishikori or Spain's Pablo Carreno Busta.