The following is the full text of a joint statement China and Brunei issued Monday during a state visit by Chinese President Xi Jinping to the Southeast Asian country. 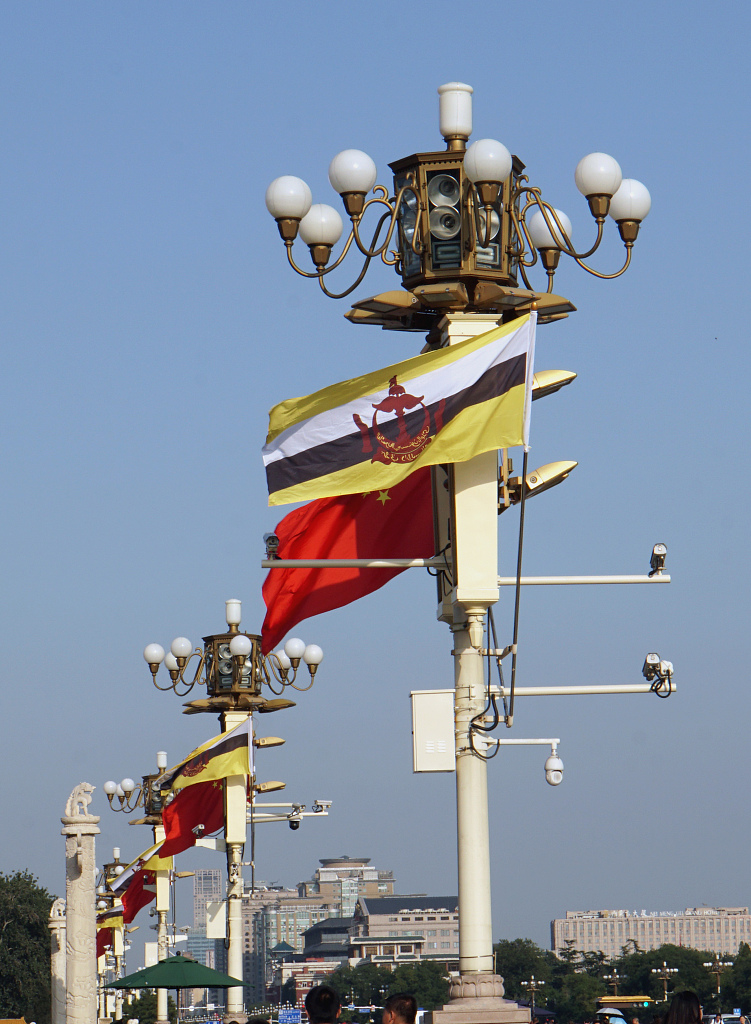 JOINT STATEMENT BETWEEN THE PEOPLE'S REPUBLIC OF CHINA AND BRUNEI DARUSSALAM

1. At the invitation of His Majesty Sultan Haji Hassanal Bolkiah Mu'izzaddin Waddaulah, the Sultan and Yang Di-Pertuan of Brunei Darussalam, His Excellency Xi Jinping, President of the People's Republic of China, made a State Visit to Brunei Darussalam from 18 to 20 November 2018.

2. During the visit, President Xi Jinping held a bilateral meeting with His Majesty, where discussions were held in a warm and cordial atmosphere. The two leaders spoke highly of the positive development and progress of China-Brunei Darussalam relations and had an in-depth exchange of views on regional and international issues of common interest.

3. The two Leaders reaffirmed their political resolve to enhance the bilateral relations through cooperation and collaboration across many areas guided by the principles and spirits encompassed within the Memorandum of Understanding between the People's Republic of China and Brunei Darussalam signed in 1991, the Joint Communiques issued in 1999 and 2004, the Joint Press Statement issued in 2005 as well as the Joint Statements issued in April and October 2013.

4. Brunei Darussalam congratulated China on its impressive achievements over the past four decades of reform and opening up, and wished China continued progress towards realising the Two Centenary Goals. China reaffirmed its strong support for Brunei Darussalam's national development goals, and expressed best wishes for the successful realisation of the Wawasan 2035 under the leadership of His Majesty.

5. The two Leaders reaffirmed their mutual respect for sovereignty, territorial integrity, and non-interference in each other's internal affairs. President Xi Jinping expressed appreciation for Brunei Darussalam's continued adherence to the One-China Policy and support for the peaceful development of cross-Straits relations and the peaceful reunification of China.

6. The two Leaders recalled the historical ties of China-Brunei Darussalam relations, and agreed that the bilateral relations have enjoyed rapid development since the establishment of diplomatic relations. Both sides fully recognise the progress made in various fields of practical cooperation over the past 5 years since the establishment of the China-Brunei Darussalam Strategic Cooperative Relationship, and agreed to elevate the bilateral relations to a Strategic Cooperative Partnership, promoting their relations to new heights.

7. Both sides agreed to maintain frequent high-level exchanges, strengthen strategic partnership and bilateral relations, and exchange views on regional and international issues. The two sides will make good use of bilateral mechanisms at all levels to coordinate and advance bilateral cooperation in various fields.

8. The two sides welcomed the signing of the Memorandum of Understanding Between the Government of the People's Republic of China and the Government of Brunei Darussalam on Establishing a Joint Steering Committee putting in place a mechanism for regular consultations at the Ministerial level to further promote and encourage cooperation and exchanges in various fields including maritime, economic, commercial and technical areas, bilateral trade and investment and energy between both sides.

9. Both sides agreed to work together to further strengthen the synergy of their respective national development strategies. China will further support the sustainable development of Brunei Darussalam's economy and its diversification endeavours. Brunei Darussalam will continue to support and jointly promote cooperation in the Belt and Road Initiative, and the two sides will work closely on the implementation of the Memorandum of Understanding on Jointly Promoting Cooperation within the Framework of the Silk Road Economic Belt and the 21st Century Maritime Silk Road Initiative between the two Governments and the newly signed Cooperation Plan.

10. The two Leaders agreed to further strengthen bilateral trade and investment cooperation, work closely to implement the Memorandum of Understanding on strengthening infrastructure cooperation, push forward the cooperation on the Hengyi Industries Sdn Bhd refinery and petrochemical plant on Pulau Muara Besar, Brunei Darussalam, in a safe and timely manner, further promote the "Brunei-Guangxi Economic Corridor", and strengthen the communication and technical cooperation in the fields of agriculture, halal food and aquaculture. In its efforts to build a strong and sustainable economy, Brunei Darussalam welcomes Foreign Direct Investment interests from China. Both sides encourage more engagements between business communities of the two countries, utilising the existing platforms such as the China International Import Expo and the China-ASEAN Expo. China expressed its readiness to share its development experiences in emerging economic fields like digital economy and e-commerce with Brunei Darussalam.

11. Both sides expressed satisfaction with the progress of cooperation in the energy sector, and agreed to continue to support relevant enterprises of the two countries to cooperate in the areas of maritime oil and gas resources, in accordance with the principles of international law and following the principle of mutual respect, equality and mutual benefit, which was set out in paragraph 10 of the China-Brunei Darussalam Joint Statement of 5 April 2013.

12. The two Leaders acknowledged the positive progress of cooperation in the fields of legal and judicial affairs, education, culture, religion, tourism, health, sports and youth and reiterated the importance to further expand people-to-people exchanges for better understanding and friendship between peoples from both sides. Both sides agreed to encourage airlines to operate more direct flights between the two countries. Brunei Darussalam also expressed appreciation for the continued participation of volunteers from China in Brunei Darussalam's educational institutions.

14. Both sides agreed to further strengthen cooperation in defence and security, and work closely to implement the Memorandum of Understanding on Strengthening Defence Cooperation.

15. Both sides further agreed to strengthen law enforcement cooperation, and explore the possibility of establishing a bilateral extradition treaty and a mutual legal assistance treaty.

17. Brunei Darussalam welcomed China's continued commitment to support ASEAN's centrality in the evolving regional architecture and China's positive participation in and contribution to the various ASEAN-led processes, including the ASEAN Plus Three (APT), the East Asia Summit (EAS) and the ASEAN Regional Forum (ARF). In this regard, both sides expressed support for efforts to further promote building the East Asia Economic Community (EAEC), called for the early conclusion of the Regional Comprehensive Economic Partnership (RCEP) Agreement, and reaffirmed their commitment to enhancing cooperation between China and ASEAN for the benefit of the peoples of the region.

19. Both sides welcomed the improving cooperation between China and ASEAN Member States in the South China Sea. Both sides reaffirmed their commitment to maintaining peace, stability and security, and the importance of continuing exercising self-restraint by all parties concerned and the promotion of mutual trust and confidence in the South China Sea. They underscored the importance of resolving territorial and jurisdictional disputes through peaceful dialogue and consultations by sovereign states directly concerned, and in accordance with universally recognised principles of international law, including the 1982 United Nations Convention on the Law of the Sea (UNCLOS). Both sides, together with other ASEAN Member States, will work towards the full and effective implementation of the Declaration on the Conduct of Parties in the South China Sea (DOC), and encouraged further progress on negotiations towards the early conclusion of an effective Code of Conduct (COC) on the basis of consensus.

20. Both sides agreed to strengthen coordination and cooperation within various multilateral frameworks, including the promotion of international relations based on mutual respect, fairness, justice, and win-win cooperation, as well as to work closely together in building a community with a shared future for mankind. Both sides will also continue to exchange views on major international issues like the reform of the United Nations and its Security Council as well as Climate Change. The two sides will jointly uphold multilateralism and resist protectionism, uphold the rules-based multilateral trading system as embodied under the World Trade Organisation, and promote an open, inclusive, and balanced economic growth that benefits all.