The latest updates on the summit between two leaders (all time local):

Both sides agreed to make joint efforts to declare an end to the Korean War, change the armistice into a peace treaty and reaffirmed their commitment to the complete denuclearization of the Korean Peninsula. 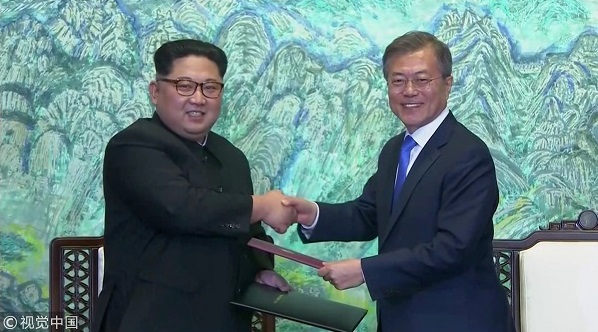 Moon Jae-in and Kim Jong Un shake hands after signing agreements during the inter-Korean summit at the truce village of Panmunjom. (Photo: VCG) 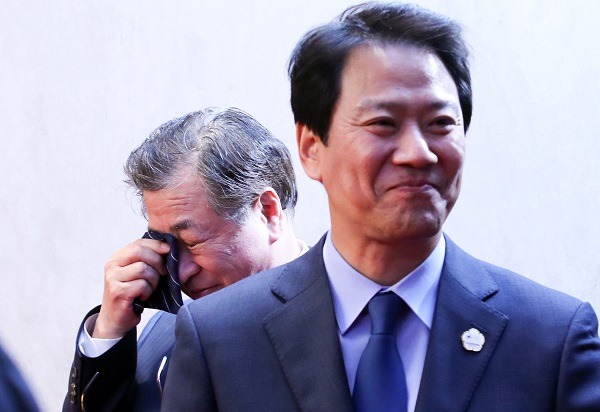 Moon and Kim finished their private talk and headed to the Peace House.

Moon and Kim went for a private walk after tree planting event. 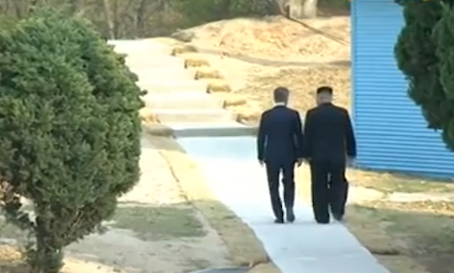 Then the two leaders sat on a bridge and made a private talk with no escorts for a long time. 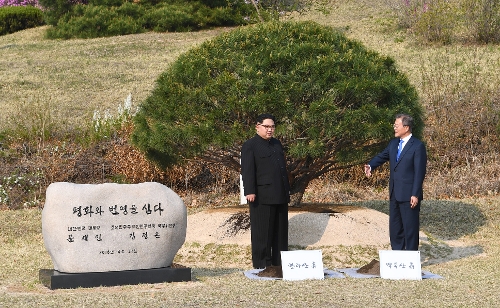 Alongside the Military Demarcation Line, Kim and Moon plant a 65-year-old pine tree together, which was initially planted in 1953 when the two sides signed Korean Armistice Agreement. 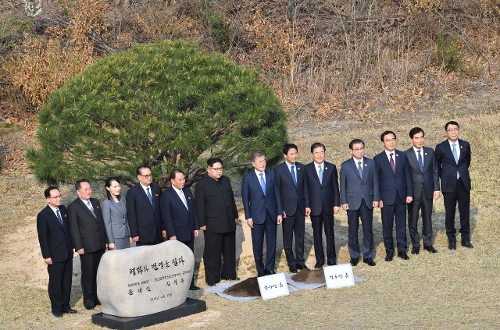 Soil from both sides, Moon watered the pine tree with water from Taedong River in DPRK and Kim used water from Hangang in South Korea.

A monument is placed in front of the pine tree, on which engraved “plant peace and prosperity” and the signatures of the two leaders. 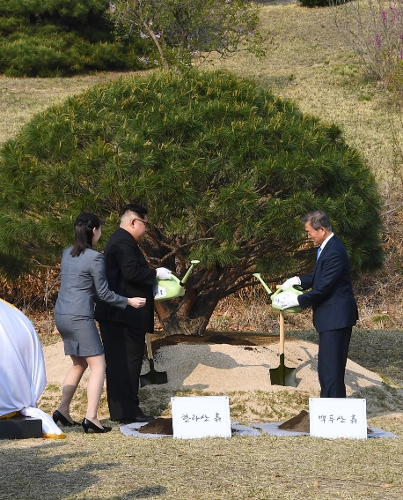 Kim and Moon made "frank" discussion on issues of denuclearization, permanent peace on peninsula and inter-Korean relationship, said Blue House official on a press briefing.

Kim will attend the banquet in the Peace House with his wife Ri Sol-ju, the official added. Ri will arrive at Panmunjom at 18:15 p.m. local time (0915 GMT). Ri will hold brief talks with Moon's wife, Kim Jung-sook, before they attend the dinner, according to Moon's chief press secretary Yoon Young-chan.

The two leaders will make a joint statement after the talks in the afternoon.

Kim said that he will got to Blue House anytime if he is invited, South Korean presidential office reported.

Both leaders promised to meet more often after ongoing summit, the office added. 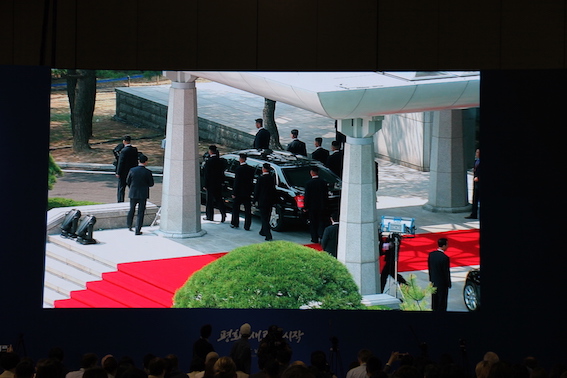 The first session of Kim and Moon's official talks ended after nearly 2 hours.

Kim left the Peace House and went back to Panmunjom at DPRK side. The two leaders will take a brief recess and eat lunch separately. Kim will cross the border again later in the day. 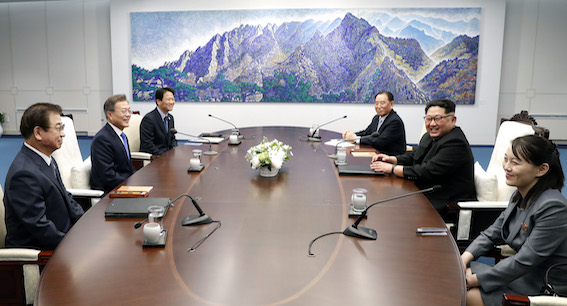 Official talks between the leaders of the two Koreas began at 10:15 am local time (0115 GMT), 15 minutes ahead of the original schedule. 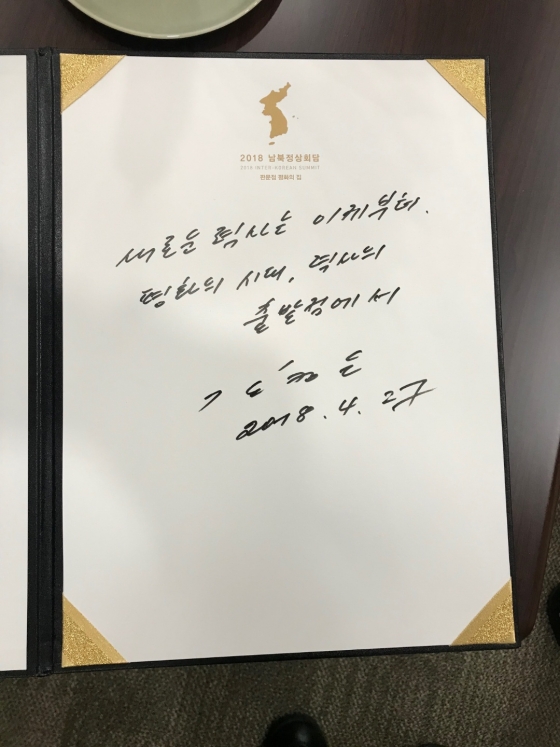 The message left by Kim Jong-un on the guestbook in the South’s Peace House before the two leaders met for a private discussion: "A new history starts now. An age of peace, from the starting point of history." (Handout photo provided to media) 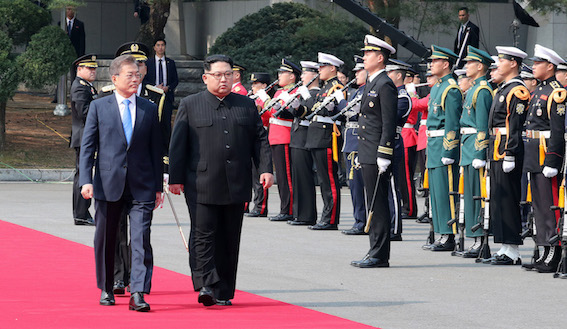 The two leaders jointly inspected a South Korean honor guard as part of an official ceremony to welcome the North Korean leader. 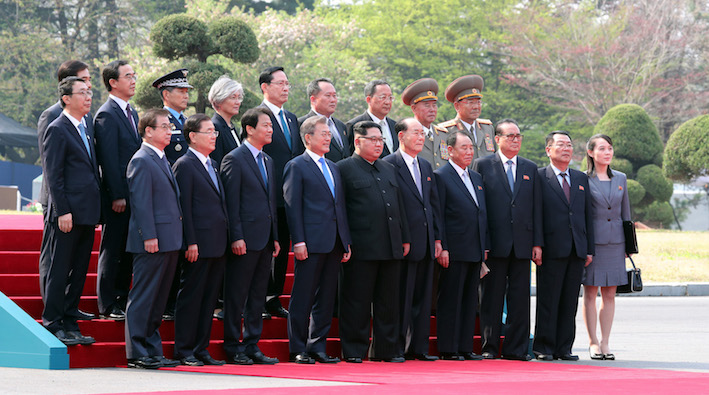 Kim surprised many watching the historic event on live television by making what appeared to be an impromptu suggestion for a group photo with Moon and all their accompanying delegates, including Kim Yong-nam, the nominal head of state, and eight other North Korean officials, which was also not on the original agenda, Yonhap news reported.

Leaders of two Koreas met at Panmunjom at 9:30 am local time (0030 GMT) before Kim crossed the Military Demarcation Line (MDL) to the South Korean side of Panmunjom.

Kim and Moon first shook hands as each stood on either side of the MDL. 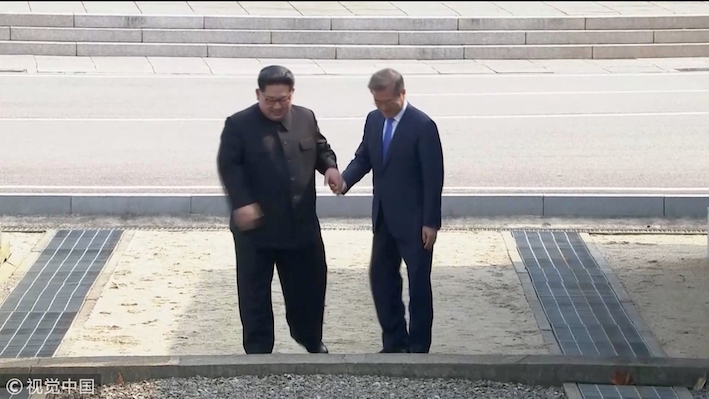 Then, surprisingly, Kim invited Moon to cross the inter-Korean border to the North Korean side, which was not on the originally agreed agenda.

Moon accepted the invitation with a broad smile, briefly crossing the border with Kim before they both returned to the South Korean side, where the leaders are holding a historic summit at the border village of Panmunjom. 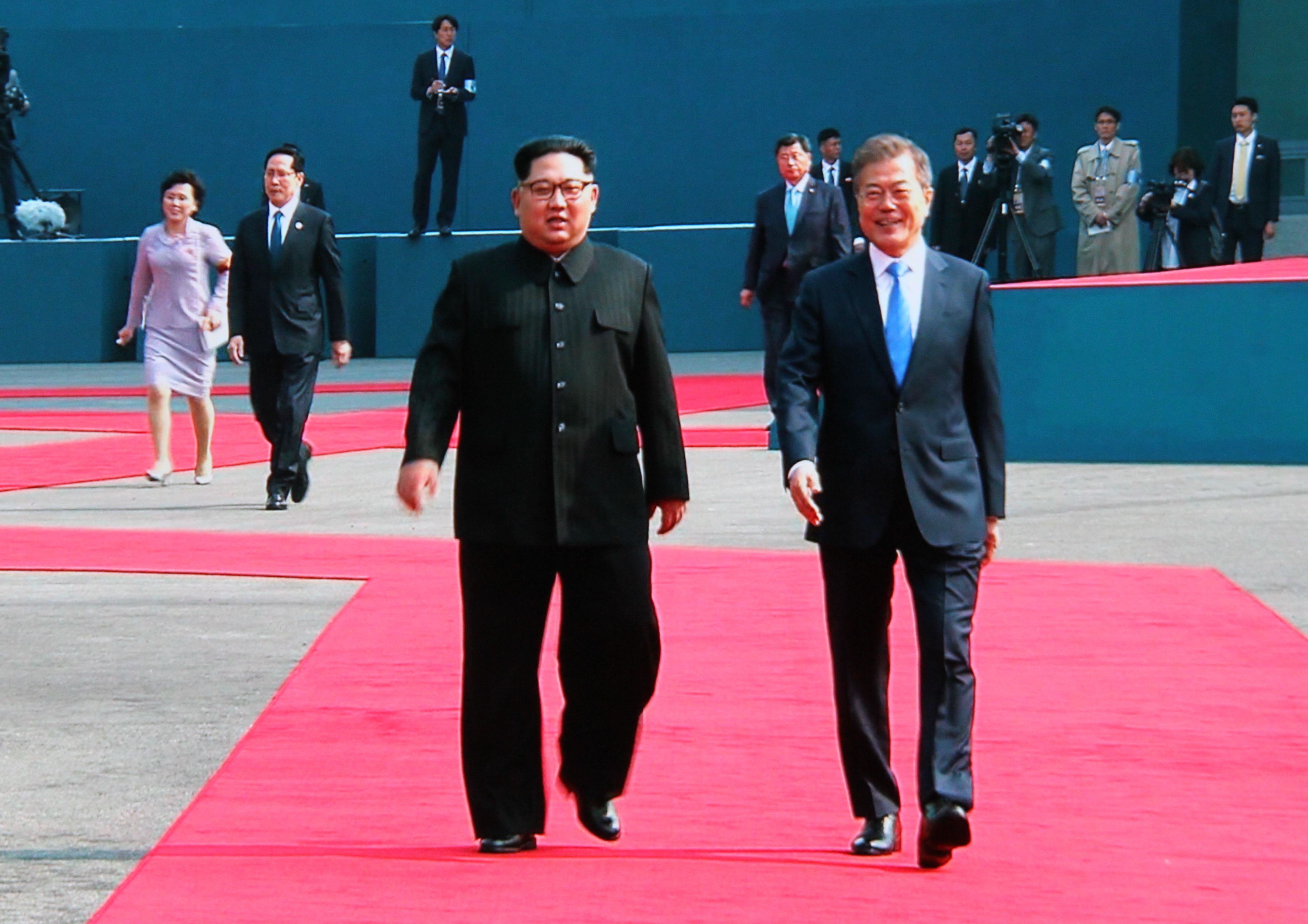 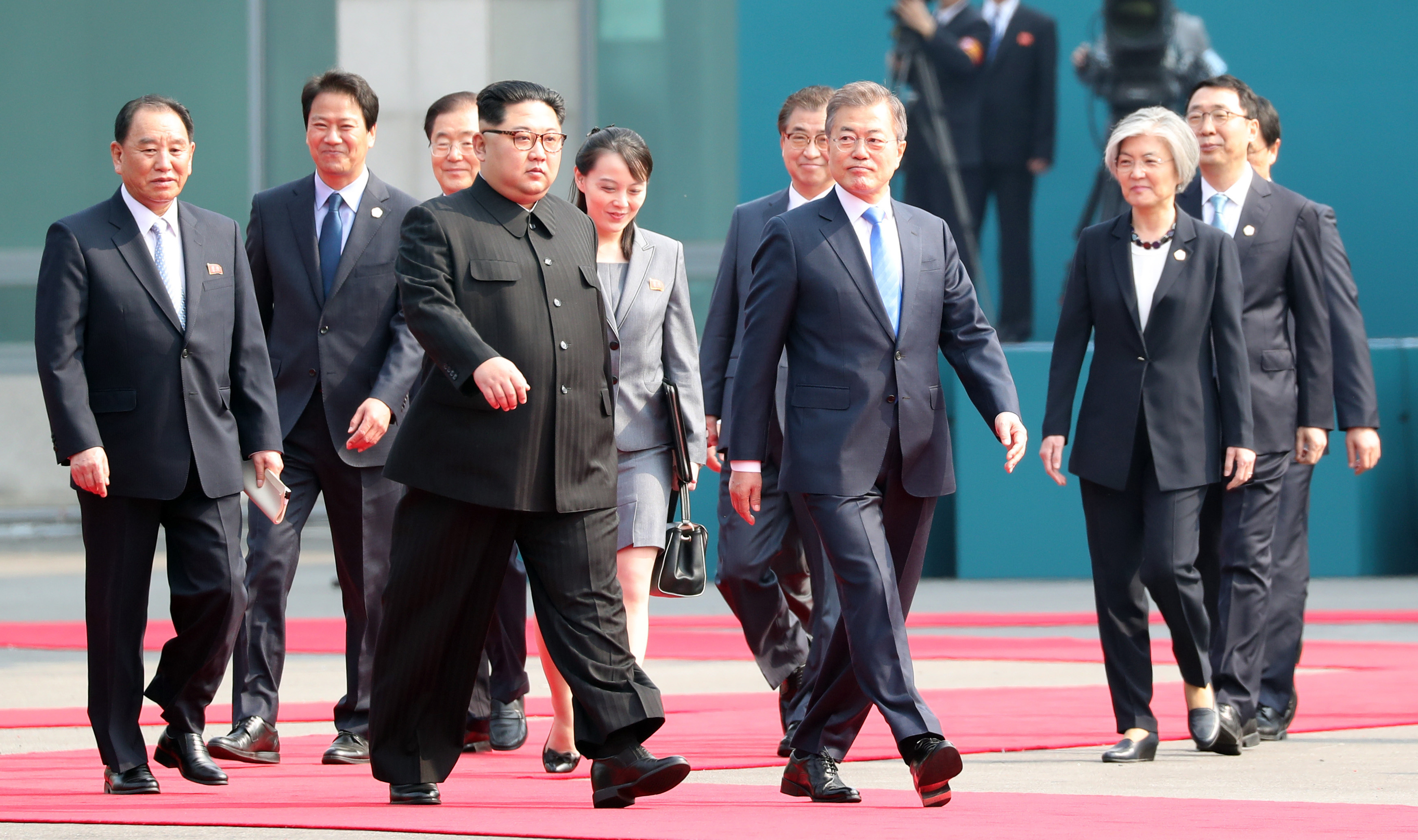 The main agenda of the summit meeting will be the North's denuclearization, a permanent peace of the peninsula and inter-Korean cooperation. 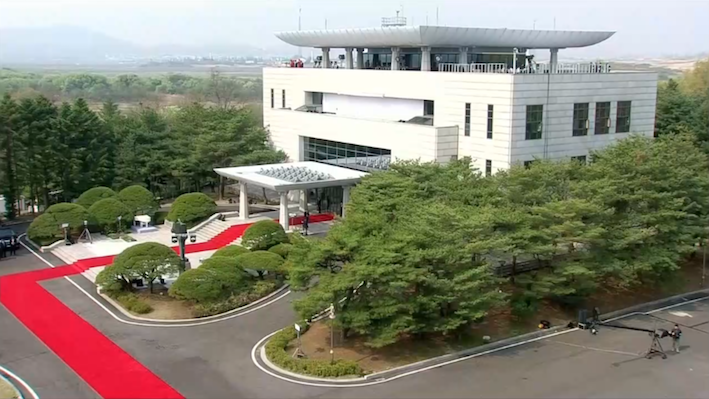 The Peace House at Panmunjom where the two leaders meet. (Photo: Xinhua)

It is the third inter-Korean summit, but the first to be held in South Korea, making Kim the first North Korean leader to step on South Korean soil since the end of the 1950-53 Korean War. The two Koreas technically remain at war as the Korean War ended with an armistice, not a peace treaty. The two previous inter-Korean summits, in 2000 and 2007, were both held in Pyongyang.

Moon has said his meeting with Kim will mainly focus on ways to completely and verifiably denuclearize the Korean Peninsula in a peaceful manner, as Yonhap News reported.

He says they may also discuss formally ending the Korean War with a peace treaty, though such efforts would require three-way discussions involving the two Koreas and the United States.

The inter-Korean summit meeting will end later in the day following a welcome dinner to be hosted by the at the Peace House of South Korean side of Panmunjom.