HEADLINE ‘Enough is enough’: US students stage walkouts against guns

‘Enough is enough’: US students stage walkouts against guns 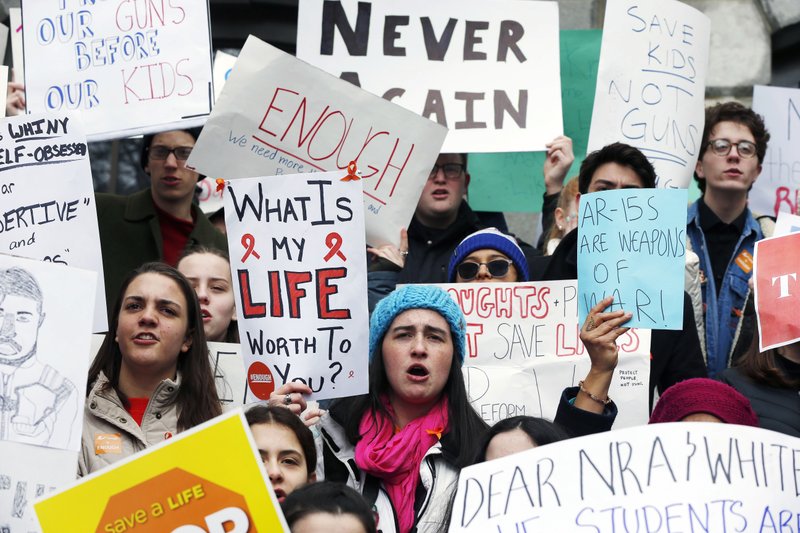 Declaring enough is enough, tens of thousands of young people from Maine to Alaska walked out of school to demand action on gun violence Wednesday in one of the biggest student protests since the Vietnam era.

Braving snow in New England and threats of school discipline in places like Georgia and Ohio, they carried signs with messages such as “Am I next?,” railed against the National Rifle Association and bowed their heads in memory of the 17 dead in the Feb. 14 shooting at Marjory Stoneman Douglas High School in Parkland, Florida.

Around the nation, students left class at 10 a.m. local time for at least 17 minutes — one minute for each of the dead in Florida. At some schools, students didn’t go outside but lined the hallways, gathered in gyms and auditoriums or wore orange, the color used by the movement against gun violence.

Over and over, students declared that too many young people have died and that they are tired of going to school every day afraid of getting killed.

New York Gov. Andrew Cuomo laid down with students from the Manhattan Center for Science and Mathematics and chanted “gun control now” as part of the nationwide school walkouts to demand action on gun violence Wednesday. (March 14)

“Enough is enough. People are done with being shot,” said Iris Foss-Ober, 18, a senior at Washburn High School in Minneapolis.

Some schools applauded students for taking a stand or at least tolerated the walkouts, while others threatened punishment.

Protesters called for such measures as tighter background checks on gun purchases and a ban on assault weapons like the one used in the Florida bloodbath.

As the demonstrations unfolded, the NRA responded by posting a photo on Twitter of a black rifle emblazoned with an American flag. The caption: “I’ll control my own guns, thank you.”

Walkouts interrupted the day at schools from the elementary level through college, and at some that have witnessed their own mass shootings. About 250 students gathered on a soccer field at Colorado’s Columbine High, while students who survived the Sandy Hook Elementary School attack in 2012 walked out of Newtown High School in Connecticut.

Students at several schools assembled on sports fields and arranged themselves into hearts, peace signs or the word “Enough.” At other schools, students spent the 17 minutes writing letters to lawmakers or registering classmates to vote.

At Eagle Rock High in Los Angeles, teenagers a moment of silence as they gathered around a circle of 17 chairs labeled with the names of the Florida victims.

In joining the protests, the students followed the example set by many of the survivors of the Florida shooting, who have become gun-control activists, leading rallies, lobbying legislators and giving TV interviews. Their efforts helped spur passage last week of a Florida law curbing access to assault rifles by young people.

But whether they can make a difference on Capitol Hill remains to be seen. Congress has shown little inclination to tighten gun laws, and President Donald Trump backed away from his initial support for raising the minimum age for buying an assault rifle to 21.

Another protest against gun violence is scheduled in Washington on March 24, with organizers saying it is expected to draw hundreds of thousands.

A spokeswoman for Education Secretary Betsy DeVos said DeVos “gives a lot credit to the students who are raising their voices and demanding change.”

“She hears them, and their input will be valuable as she convenes the Federal Commission on School Safety and works to find solutions to keeping all students safe at school,” spokeswoman Liz Hill said.

Historians said the demonstrations were shaping up to be one of the largest youth protests in decades.

“It seems like it’s going to be the biggest youth-oriented and youth-organized protest movements going back decades, to the early ’70s at least,” said David Farber a history professor at the University of Kansas who has studied social change movements.

“Young people are that social media generation, and it’s easy to mobilize them in a way that it probably hadn’t been even 10 years ago.”

The coordinated protests Wednesday were organized by Empower, the youth wing of the Women’s March, which brought thousands to Washington last year.

In the nation’s capital, more than 2,000 high-school age protesters observed the 17 minutes of silence by sitting on the ground with their backs turned to the White House as a church bell tolled. The president was out of town. 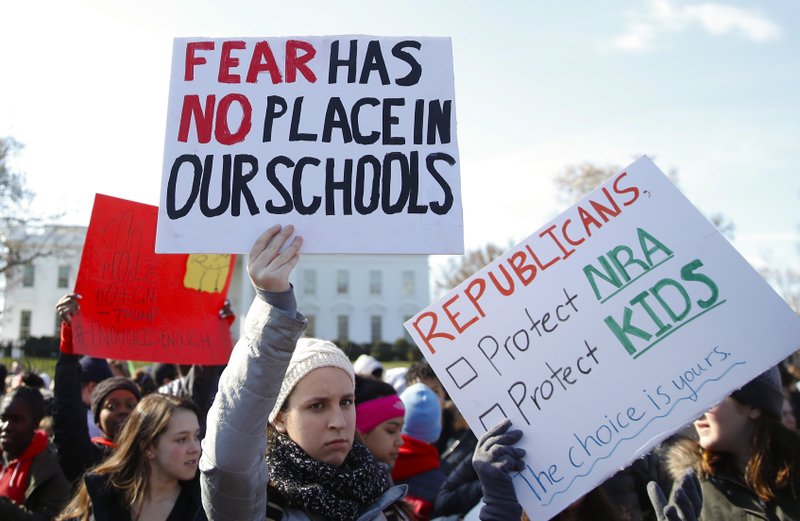 The protesters carried signs with messages such as “Our Blood/Your Hands” and “Never Again” and chanted slogans against the NRA.

In New York City, they chanted, “Enough is enough!” In Salt Lake City, the signs read, “Protect kids not guns,” ″Fear has no place in school” and “Am I next?”

Stoneman Douglas High senior David Hogg, who has emerged as one of the leading student activists, livestreamed the walkout at the tragedy-stricken school on his YouTube channel. He said the students could not be expected to remain in class when there was work to do to prevent gun violence.

At Aztec High School in a rural, gun-friendly part of New Mexico where many enjoy hunting and shooting, students aimed to avoid gun politics and opted for a ceremony honoring students killed in shootings — including two who died in a December attack at Aztec.

“Our kids sit on both ends of the spectrum, and we have a diverse community when it comes to gun rights and gun control,” Principal Warman Hall said.

About 10 students left Ohio’s West Liberty-Salem High School — which witnessed a shooting last year — despite a warning they could face detention or more serious discipline.

Police in the Atlanta suburb of Marietta patrolled Kell High, where students were threatened with unspecified consequences if they participated. Three students walked out anyway.

The walkouts drew support from companies such as media conglomerate Viacom, which paused programming on MTV, BET and its other networks for 17 minutes during the walkouts.