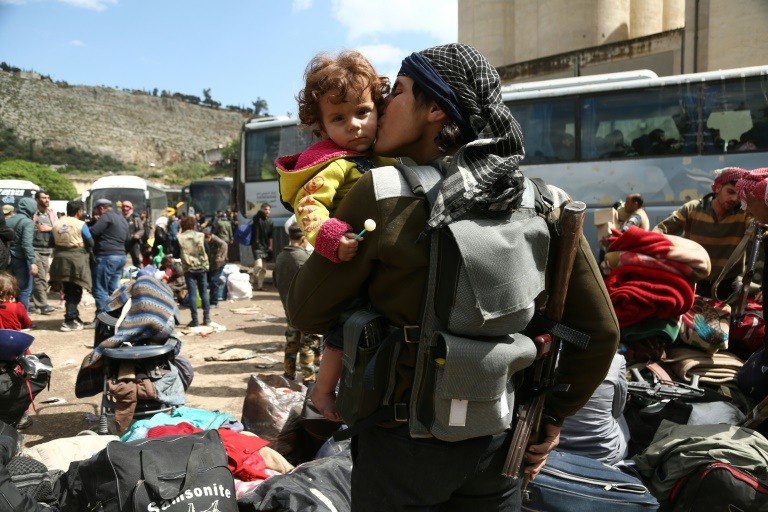 A rebel fighter from Eastern Ghouta, holds his weapon as he kisses a child after arriving in Qalaat al-Madiq, some 45 kilometres northwest of the central city of Hama, on March 30, 2018, following the ongoing evacuation deals (Photo: AFP)

A final deal appeared to have been reached Sunday for fighters and civilians to leave the last opposition-held area of Eastern Ghouta, paving the way for Syria's regime to retake all of the one-time rebel enclave near Damascus.

There was no immediate confirmation from the rebels, but state news agency SANA reported a deal had been reached for the group's fighters to head to rebel-controlled town of Jarabulus in the northern province of Aleppo.

The retaking of Eastern Ghouta would mark a major milestone in President Bashar al-Assad's efforts to regain control of territory seized by rebel factions during Syria's seven-year civil war.

Backed by Russia, Assad's forces have scored a series of victories over rebel forces in recent years, often through campaigns of siege, aerial bombardment and ground offensives that have drawn widespread international condemnation.

The Syrian Observatory for Human Rights, a Britain-based monitor, said the deal provides for Jaish al-Islam fighters and their families, as well as civilians who want, to head to Jarabulus and the town of Al-Bab, both held by pro-Turkey rebels.

It will see Russian military police enter the former rebel bastion of Douma and government institutions return, the monitor said.

Regime forces have already retaken more than 95 percent of Eastern Ghouta in a six-week air and ground blitz that has killed hundreds of civilians and forced tens of thousands from their homes.

On Sunday, Pope Francis called for an end to "carnage" in Syria in his Easter message.

"Today we implore fruits of peace upon the entire world, beginning with the beloved and long-suffering land of Syria," the pontiff said.

Syria's conflict has killed more than 350,000 people since 2011, and spiralled into a complex war involving world powers.

Appealing to the "consciences of all political and military leaders," Francis urged "that a swift end may be brought to the carnage".

Successive evacuation deals were reached with rebel forces in other parts of Ghouta, with more than 45,000 fighters and civilians bussed out in recent weeks, according to an AFP tally of figures provided by SANA.

More than 4,000 people left the devastated town of Harasta last week under a deal with the Ahrar al-Sham rebel group.

And more than 41,000 evacuated a southern pocket including the town of Arbin this week under another deal with the Faylaq al-Rahman opposition faction.

Tens of thousands of other civilians have fled to regime-held territory.

Another agreement has also been reached for hundreds of civilians in Douma to leave for Idlib, a northwestern province still largely outside regime control, the Observatory said Sunday.

A civilian committee taking part in the negotiations with Russia said a deal had been agreed "to evacuate humanitarian cases to northern Syria". It gave no further details nor did it say when the planned evacuations would start.

Talks with Jaish al-Islam for the evacuation of Douma had dragged on for several days, with residents growing nervous.

"Of course I would rather leave. There are no more homes here, not a single place to settle," said Abu Rateb, 30.

"But I won't go to regime-held areas to join ranks with the Syrian army," he said, adding he would prefer to go to Idlib.

Haitham, 38, a media activist who did not give his surname, said he would rather stay in his hometown.