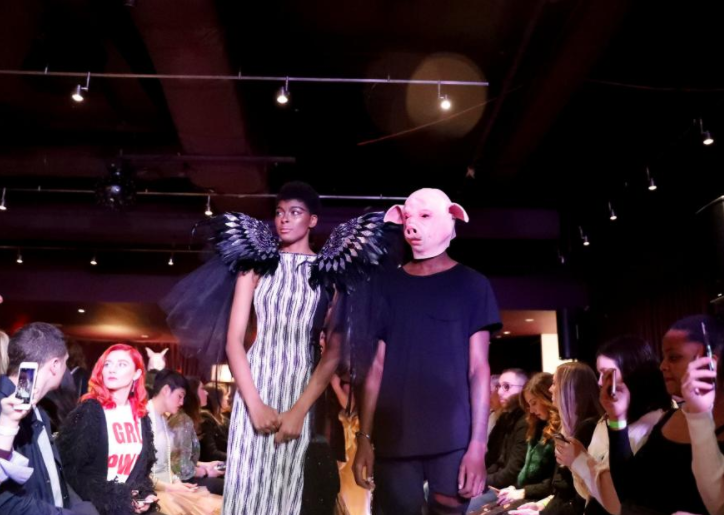 A fashion show inred by the #MeToo social media campaign aimed at exposing sexual misconduct across the United States opened on Friday in New York with models sporting angel wings handcuffed to men in pig masks.

Dressed in a floor-length black and white gown with leather trim and wings at her shoulders, Cheyenne Jacobs, 22, stopped at the end of the runway to declare herself a survivor of sexual abuse, giving the audience a brief account of being sexually assaulted in high school and raped in college.

“I would like to take this moment as a stand of my healing, how far I’ve grown and also to say that this is not only a movement, not just stories, but we’re real people who have gone through real things,” she said.

“I don’t think this fashion show is going to change things overnight, but if it can be a step further then I guess I’ve done my part. A woman who has been empowered is a woman who is unstoppable,” Chalek told Reuters in an interview.

To the pace of trendy music, women from several walks of life, some smiling and others more serious, first strutted down a runway to display their designer clothes, then reappeared handcuffed to male models wearing pink pig masks.

Among them was Alicia Kozakiewicz, 29, who was abducted in 2002 near her home in Pittsburgh, Pennsylvania, by a man who contacted her online, a case that made international headlines as one of the first such kidnappings of the internet age.

Walking confidently down the runway in a black leather hood and dress cinched at the waist with a corset, Kozakiewicz paused to explain how she overcame victim-blaming, even by her family, and became a motivational speaker and aspiring actor.

”The me-too movement is not about man-hating; it is not about fighting violence with violence,” said Kozakiewicz. “It is, however, empowering women and girls to live in a world free of fear so that they can be safe from sexual assault and sexual harassment.”

While the show featured American Wardrobe fashions, Chalek said the event was nonprofit.

Since October, hundreds of women have accused powerful men in business, politics, media and entertainment of sex abuse, joining the #MeToo social media movement that has shone a light on sexual assault and harassment in U.S. life.

In the fashion world, sexual abuse allegations have also come from men.

The New York Times reported last month that more than two dozen male models and assistants who worked with high-powered fashion photographers Bruce Weber and Mario Testino say they were subjected by them to molestation, sexual advances and unnecessary nudity.

Lawyers for both photographers told The Times they denied the allegations, which nevertheless prompted the magazine company Conde Nast to suspend its work with them. Reuters could not independently confirm any of the accusations.