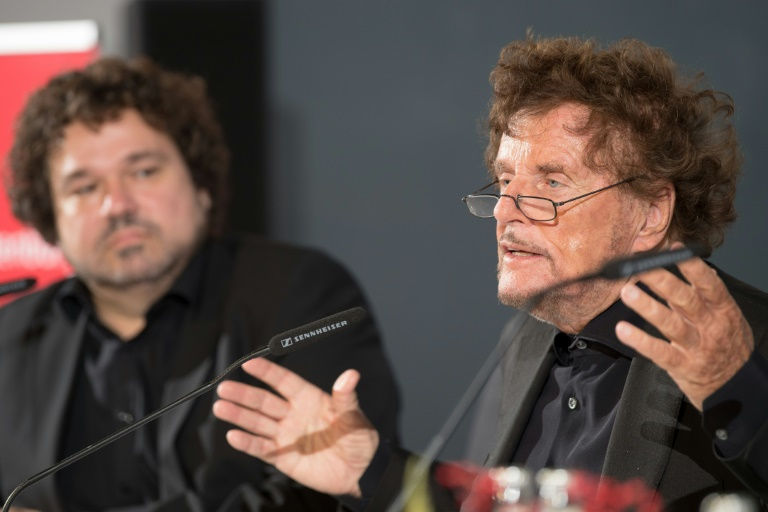 German TV director Dieter Wedel (R) has denied allegations of sexual abuse and said he was the victim of a "witch-hunt". Photo: AFP

A growing sexual assault and harassment scandal surrounding a prominent German TV director took on a political dimension Friday as accusations of a cover-up hit a public broadcaster.

The cascade of allegations against the director, Dieter Wedel, are the first in Germany since the global #MeToo movement against sexual misconduct gained momentum in the wake of the disgraced Hollywood mogul Harvey Weinstein's downfall in October.

In two high-profile articles, the respected weekly Die Zeit has reported accusations levelled by several women against Wedel, 75, ranging from rape to pressuring female staff to have sex.

This week, state-funded television channel Saarlaendischer Rundfunk (SR) admitted it was aware of sexual misconduct allegedly committed by Wedel in the 1980s and continued working with him.

SR chief Thomas Kleist said he was "very upset" by the information about an attempted rape of a show's star he found in the broadcaster's files and pledged a thorough internal investigation.

Later Friday, the head of national public network ARD, Ulrich Wilhelm, said the next meeting of Germany's regional broadcasters in early February would tackle the problem of sexual misconduct.

"People who work for us must be protected from attacks and sexism -- sexual harassment and abuse of power must not be tolerated," he said in a statement.

She told the daily Bild this must include "recommendations for improving preventive measures" on sexual harassment and abuse.

Wedel, one of the country's most successful television directors, has produced most of his movies for public broadcasting, which commentators said called for a particularly thorough official reckoning.

"If the accusations against Wedel are true -- and based on the clarity and the sheer number of statements against him, we must assume so -- then Wedel is the personification of everything the 'Me Too' movement denounces," columnist Heribert Prantl wrote in the daily Sueddeutsche Zeitung Friday.

"Wedel may be the German Harvey Weinstein."

Calling the documents discovered at SR "shocking", Prantl said it was now crucial to determine "by whom and why his abuse of power was silenced and covered up".

In early January, Wedel firmly denied the first round of accusations against him, saying he had become the victim of a "witch-hunt".

He has not yet responded to the second wave of women coming forward, published Thursday in Die Zeit. A spokeswoman for Wedel said he was in hospital with a heart ailment.

Most of the accusations against Wedel are too old to be brought to trial due to the statute of limitations, with some of them dating back to the 1970s.

However authorities in the southern city of Munich have opened a criminal probe over a rape he allegedly committed there in a hotel room in 1996.

German media initially gave limited coverage to the cases, and the top-selling Bild ran front-page articles raising pointed questions about some of the accusers' credibility.

However the tone has grown more critical of Wedel with the latest, more graphic testimony printed in Die Zeit.