'Shame on you!' student tells Trump at Florida anti-gun rally 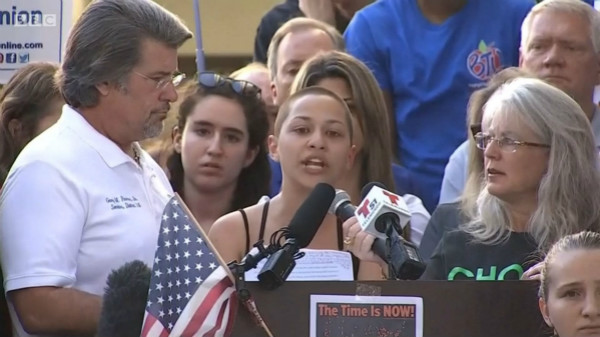 A student survivor of the Parkland school shooting called out US President Donald Trump on Saturday over his ties to the powerful National Rifle Association, as hundreds rallied in Florida to demand urgent action on gun control.

Three days after a troubled teen armed with an assault rifle killed 17 people at Marjory Stoneman Douglas High School, 18-year-old Emma Gonzalez delivered a fiery address to a crowd of students, parents and residents in nearby Ft. Lauderdale.

"To every politician taking donations from the NRA, shame on you!" she thundered, assailing Trump over the multi-million-dollar support his campaign received from the gun lobby -- and prompting the crowd to chant in turn: "Shame on you!"

"We are going to be the last mass shooting," she vowed. "We are going to change the law," she said -- slamming the fact 19-year-old gunman Nikolas Cruz was able to legally buy a semi-automatic firearm despite a history of troubling and violent behavior.

"The question on whether or not people should be allowed to own an automatic weapon is not a political one. It is question of life or death and it needs to stop being a question of politics," Gonzalez told AFP following her speech.

In Washington, the political response has made clear that the powerful NRA pro-gun lobby remains formidable, while Trump himself suggested the root cause of mass shootings was a crisis of mental health -- making no mention of gun control.

"If the president wants to come up to me and tell me to my face that it was a terrible tragedy and... how nothing is going to be done about it, I'm going to happily ask him how much money he received from the National Rifle Association," Gonzalez said in her impassioned address.

"It doesn't matter because I already know. Thirty million," she told the rally attended by fellow students, parents and local officials, citing the sum spent by the NRA to support Trump's election bid and defeat Hillary Clinton.

She then ran through a list of the pro-gun lobby's talking points -- for example, that "a good guy with a gun stops a bad guy with a gun," that no law could ever stop a madman intent on killing -- answering each argument with "We call BS."

Trump tweeted a day after the massacre that neighbors and fellow students had failed to flag Cruz to the authorities.

"We did," Gonzalez fired back at Trump, her voice shaking with emotion as she insisted the community had done its best to raise the alarm. "Time and time again. Since he was in middle school. It was no surprise to anyone who knew him to hear that he was the shooter." 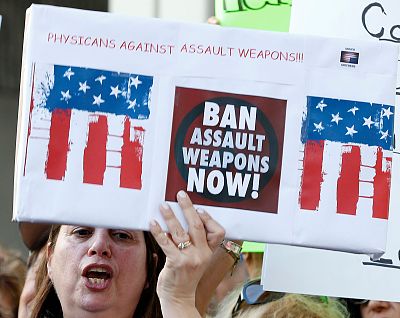 US authorities have come under mounting scrutiny for failing to act on a series of warning signs.

The FBI admitted Friday it received a chilling warning in January from a tipster who said Cruz could be planning a mass shooting, but that agents failed to follow up.

Cruz was also known to local police after his mother repeatedly reported him for violent outbursts, while records obtained by the South Florida Sun Sentinel show authorities investigated Cruz in 2016 after he cut his arms on messaging app Snapchat and threatened to buy a gun.

The newspaper, citing Department of Children and Family Services documents, said the investigation came four days after Cruz turned 18 -- legally an adult, and thus able to buy a firearm.

Investigators said there were "some implications" for the teen's safety, but concluded that his "final level of risk is low as (he) resides with his mother, attends school and receives counseling" as an outpatient from a mental health center, the Sun Sentinel said.

Cruz later passed a background check, allowing him in February 2017 to buy the AR-15 rifle -- a civilian version of the US military's M16 -- he used in the massacre.

Trump on Friday visited survivors and first responders in the attack, which took place not far from his Mar-a-Lago estate where he was spending the holiday weekend.

Photos posted online showed him smiling at the hospital bedside of a teenage girl, and giving a thumbs-up as he posed with medical workers and law enforcement.

He tweeted Saturday that he and first lady Melania had met "incredible people," and will "never forget them, or the evening!"

Trump is staunchly opposed to additional restrictions on guns or gun ownership, but Vice President Mike Pence said at an event in Dallas the president would make school safety "a top priority" when he meets with governors of US states in the coming days.

"Let's pray for wisdom. For all in positions of authority that we might find a way to come together as a nation to confront and end this evil in our time once and for all," Pence said.