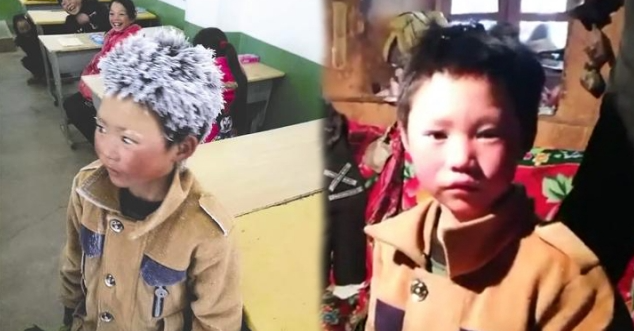 A rural Chinese boy has become an overnight internet sensation after a picture of his white-icicle hair went viral online. Dubbed "snowflake boy," the 8-year-old spent more than an hour trekking 4.5 kilometers to school in sub-zero temperatures and arrived at class with hair and eyebrows completely white from frost.

The boy is among millions of children in poverty-stricken areas of China desperate for knowledge. The picture that has touched the nerves of almost all netizens evidently suggests that China is still a developing country lagging behind its developed counterparts in education, healthcare, housing and so forth.

While parents in first-tier cities pour tens of thousands of yuan into sending their children to extracurricular classes and summer camps, rural pupils make a grueling trek to a classroom that, in most cases, has no heating in winter - the only place for them to access knowledge.

Despite achievements in recent years, China still faces an arduous task developing comprehensive welfare for its people. The year 2018 marks the 40th anniversary of China's reform and opening-up, and education is a key contributor to the tremendous achievements that the country has seen in the past four decades.

Although China's rise has reshaped the global economy, obstacles stand in the way of the country becoming a real global actor and catching up with the likes of the US and Germany.

The significance of educational equality in China's rise cannot be underestimated as it will be a generation of "snowflake boys" that drive development 30 years from now.

Rural students, especially those left in the care of relatives by their migrant-worker parents, should be given more educational support. Financially advantaged children have many options to thrive, but for rural kids, education is perhaps the only opportunity to climb the ladder of social status.

It's not unusual for children from upper-class families to socialize together, attend international occasions at an early age and thus gain much broader horizons and more resources than their counterparts, a facilitator for success.

But for poverty-stricken students, an educational background may directly affect their future jobs, salaries and working environment. More efforts should be invested to provide snowflake boys and girls with easier access to the educational resources on which they can rely to pursue better prospects. This is the basis for the great rejuvenation of the Chinese nation.