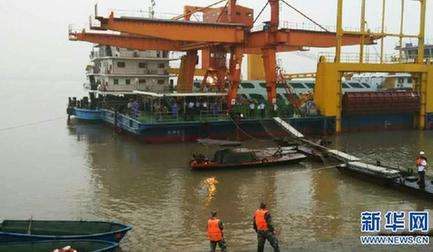 One person has died and another five remain missing after a cargo vessel capsized Thursday in the Yangtze River in Central China's Hubei Province, authorities said Friday.
Nine people fell into the water at a section of the Yangtze in Qichun County, Huanggang, on Thursday evening, said an official with the county's publicity department.
One person was pulled out of the water at around 1:10 am Friday, after rescuers cut open the vessel and six divers took turns to enter the vessel's cabin. That person later died after medical efforts failed. Three others have been rescued and are in stable conditions.
A total of 23 rescue boats, in addition to more than 200 rescuers, are still searching for the five missing. Authorities have published the names of the missing.
Investigations show that the vessel was registered in Hubei's Badong County. It measures 75.5 meters long and 11.4 meters wide, with a molded depth of 4.1 meters. It can carry a weight of 1,900 tonnes.