10 days, five countries: What to expect from Trump's Asia visit 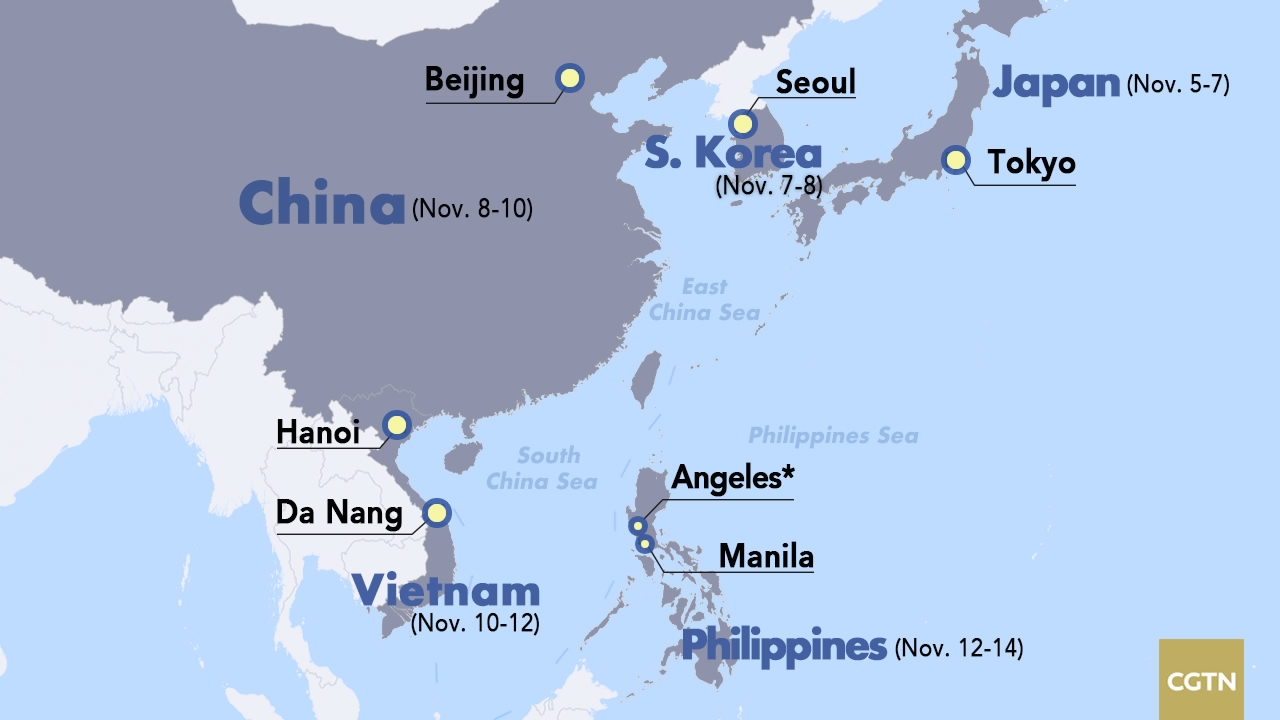 US President Donald Trump will arrive in Asia for a five-nation tour on November 5. His first diplomatic trip to the continent will take him to Japan, South Korea, China, and an APEC meeting in Vietnam, before heading to the Philippines for an ASEAN meeting and the East Asia Summit.

Here’s what to expect at each leg of Trump’s longest foreign trip as president: 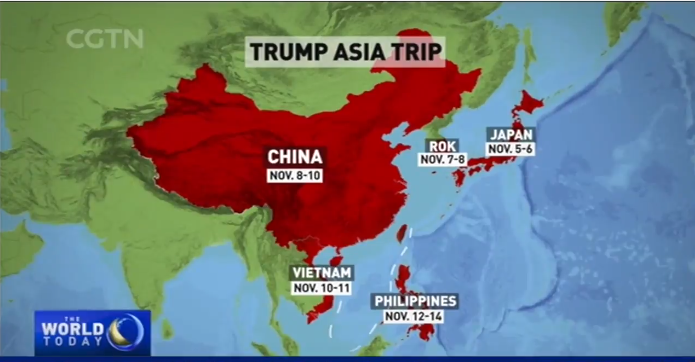 –  Issues: Japan is pushing ahead with the Trans Pacific Partnership (TPP) despite US withdrawal, Trump is expected to push for a US-Japan free trade agreement (FTA); Trump is set to urge Japan to open its market to more made-in-America goods, Abe is likely to look for high-tech deals with the US; the leaders are expected to stand shoulder to shoulder on their approach to the DPRK, while military and nuclear cooperation are set to be discussed; Trump has also put the return of Japanese citizens abducted by the DPRK on the agenda.

–  Visits: Abe and Trump will play a round of golf with Japanese pro Hideki Matsuyama; Pikotaro, singer of "Pen-Pineapple-Apple-Pen" and a favorite of Ivanka Trump’s daughter, has been lined up to entertain the leaders at dinner.

–  Issues: Moon has ruled out unilateral US action in the DPRK and tried to take the lead in diplomacy with Pyongyang; the US president will argue for increased pressure on the DPRK in an address to the National Assembly; the deployment of the THAAD missile defense system and the costs of keeping 28,000 US troops in South Korea are likely to come up; Moon wants Seoul to regain wartime operational control of troops from the US; Trump has attacked the US-South Korea FTA as a “horrible deal” and amendments are set to be made to keep it alive.

–  Visits: State banquet; national cemetery; Camp Humphreys, US army base; plans for Trump to visit the Demilitarized Zone have been abandoned.

–  Issues: Joint efforts to curtail the DPRK and possible trade deals are likely to lead headlines; China has committed to opening up its market to more foreign companies, an issue Trump has spoken about previously; criticisms of China’s trade practices may not be repeated, but Trump is likely to call for a more balance in the trade relationship; a series of commercial deals could also be agreed.

–  Visits: Trump is expected to make cultural visits in Beijing, as well as attend a banquet.

–  Issues: Slated to set out a US vision towards Asia-Pacific in a speech to the APEC CEO meeting; free trade will be on the APEC agenda, and agreement on an 11-nation TPP is likely to move closer; Vietnam was disappointed by US withdrawal from TPP but US-Vietnam trade relations have developed rapidly, further expansion is expected; security cooperation is also likely to be discussed.

–  Issues: Trump will mark the 40th anniversary of US-ASEAN relations; a unified response to the Korean Peninsula tensions is likely to be discussed with ASEAN leaders; bilateral meetings with Duterte are likely to focus on the fight against ISIL and the Philippine leader’s war on crime; Trump made a late decision to attend the East Asia Summit. *The White House is yet to clarify whether he will travel to Angeles for the East Asia Summit, however, or attend a launch event in Manila.