11 soldiers, 4 IS assailants killed in army camp attack in Kabul

Eleven army soldiers and four assailants were killed Monday after the Islamic State (IS) gunmen attacked an army camp in western Kabul, capital of Afghanistan, the seventh major attack in the country this month.

Some 16 Afghan army personnel were also wounded in the predawn attack, for which the IS claimed responsibility, said the country's Defense Ministry in a statement.

The attack started when five militants stormed a battalion of the army's Kabul 111 Division in the Charrah-i-Qambar area located in Police District 5 and also fired on the nearby Marshal Fahim National Defense University, according to sources.

The statement, however, rejected earlier reports of the IS fighters attacking the university, saying that the target of the militants was the battalion, where the attackers had used assault rifles and rocket-propelled grenades.

According to the statement, after a few hours of fighting, the security personnel were able to kill two attackers. One attacker was arrested by the army and two others detonated their suicide vests during the clashes. 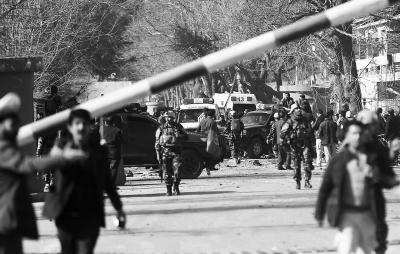 Monday's incident came on the heels of a massive car bombing in central Kabul two days ago, which killed about 103 people and injured 235, the deadliest attack in months.

On Saturday, terrorists blew up an ambulance laden with explosives. The attack, for which the Taliban claimed responsibility, followed another assault by their militants on a luxury hotel in Kabul a week ago that killed 22 people.

As rampant terror attacks have dealt a heavy blow to the country, the Afghan government declared Sunday as a national mourning day to pay tribute to the victims of a string of attacks in Kabul, eastern Nangarhar, southern Helmand and Kandahar provinces.

The United Nations (UN) and multiple countries have expressed their strong condemnation of Saturday's attack.

In a press statement released on the day, the UN Security Council condemned the attack "in the strongest terms," expressing deepest sympathy and condolences to the families of the victims and the Afghan government.

"The Chinese side stands against all forms of terrorism, and firmly supports the Afghan government and people in their efforts to combat terrorism, safeguard national stability and people's safety," Hua said.

On Sunday, the Nepali government sent its wishes for an early recovery of those injured, and expressed the hope that the perpetrators of the heinous act would be brought to justice soon.

The Egyptian government denounced "in the strongest terms the sinful terrorist attack perpetrated by the Taliban terrorist movement," expressing solidarity with the Afghan people and government "in the face of brutal terrorism."

King Abdullah II of Jordan voiced condolences over the innocent lives lost, stressing Jordan's solidarity with Afghanistan and pledging support for its efforts to uproot terrorism and preserve stability and security.

The Kuwaiti government, in a Sunday statement, urged the international community to double efforts to eliminate terrorism and free the world from this menace.

US President Donald Trump has also condemned the attack, saying in a White House statement that the United States is committed to a secure Afghanistan that is free from terrorists.

The French people showed their support by turning off the lights on the Eiffel Tower, the country's most iconic structure. Pakistan and India have also strongly condemned the deadly car bomb attack.

Kabul, with a population of nearly 5 million, has been hit by series of terror attacks over the past couple of years.