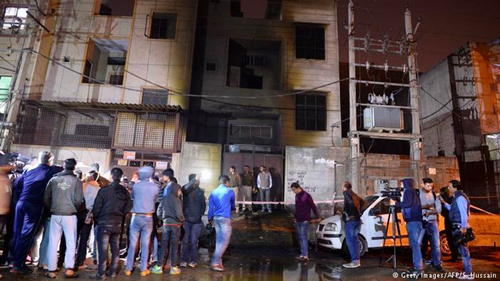 The factory after the fire. (Photo: S. Hussain/ AFP)

Officials said they believe that the fire started on the ground floor and spread to the upper three floors. They added the fumes choked the victims to death.

The Delhi Fire Service said they received a fire call around 6:20 p,m. Saturday local time and raced to the scene. The investigation into the cause is still underway.

India Prime Minister Narendra Modi sent his condolences to the relatives of the victims late Saturday. “My thoughts are with the families of those who lost their lives. May those who are injured recover quickly,” tweeted the Prime Minister’s Office.

Fire accidents are not uncommon in India. The latest available official data showed a total of 17,700 people died in accidental fires in India in 2015, and one of the worst cases over the past 25 years occurred at a Delhi cinema in 1997, which killed 59 people and injured 103 others.