18 civilians killed by Turkish airstrikes and shelling in Syria's Afrin 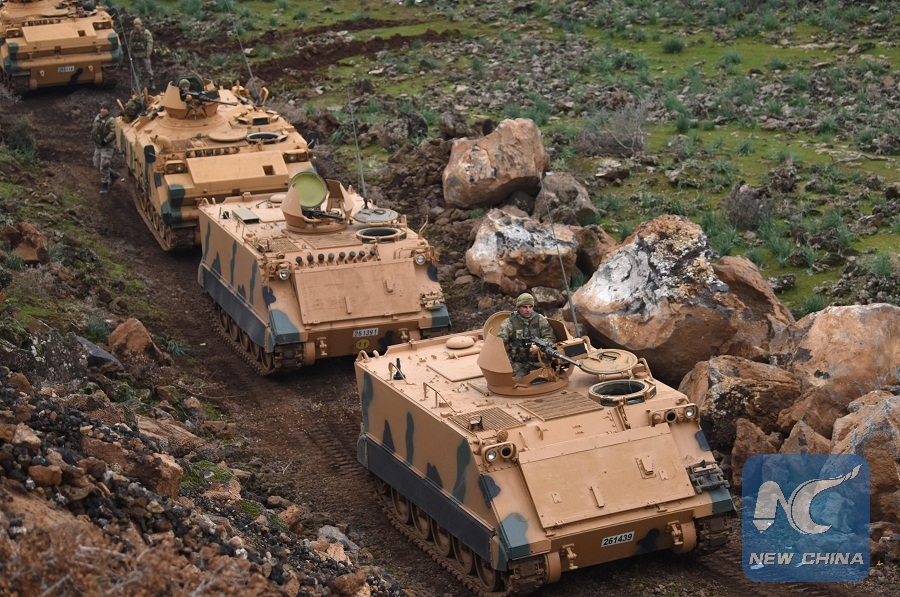 At least 18 civilians have been killed in the Turkish military campaign against Syria's Kurdish-held Afrin enclave in northern Syria, a monitor group reported Sunday.

The Syrian Observatory for Human Rights said the deaths occurred in Afrin and surrounding villages, as Turkey started its offensive on Saturday by airstrikes and shelling and commenced its ground incursion on Sunday to drive out the Kurdish forces from border areas between Syria and Turkey.

Kurdish activists said 11 civilians, including six children and women, were killed and 16 others wounded on Sunday in Afrin by the Turkish fire.

The Kurdish People's Protection Units, or YPG, said four of its fighters were killed as well as 10 fighters of the Turkey-backed Free Syrian Army (FSA) since Saturday when the Turkish-backed forces attempted to storm several border villages of Afrin.

Meanwhile, Kurdish activists said Intense battles raged between the YPG and the Turkish army on the outskirts of the Adama town in the countryside of Afrin after the attempt of the Turkish army to advance int the town.

For his part, Syrian President Bashar al-Assad said Sunday that the "Turkish aggression on Afrin cannot be separated from the Turkish policies undertaken since the first day of the Syrian crisis to support terrorism and the terrorist groups in Syria."

Earlier in the day, Ankara said it had begun the ground incursion into Afrin, a day after intense shelling and airstrikes that marked the beginning of the Turkish campaign against the Kurdish fighters in Syria.

Turkey's military operation in Afrin aims to deal a strong blow to the Kurdish fighters and weaken their growing influence in northern Syria near Turkey.

The operation came particularly after the Kurdish forces defeated the Islamic State in Syria's northern province of Raqqa, and when the U.S. is forming 30,000-strong border forces from the Kurdish-led Syrian Democratic Forces (SDF) and other Kurdish fighters in northern Syria.