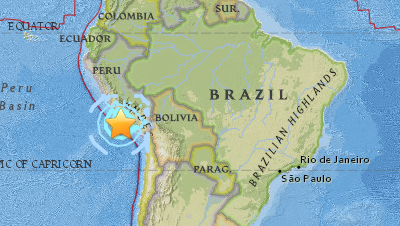 (Photo via the US Geological Survey)

A 7.3-magnitude quake which struck Peru Sunday morning has killed two people, while the country's health minister said 17 people went missing after a mine collapsed following the quake.

The quake hit offshore at 4:18 a.m. local time (0918 GMT) at a depth of around 36 km, according to the U.S. Geological Survey. Peru's Civil Defense Institute said on Twitter that 65 people were injured.

An informal mine east of the coastal city of Chala collapsed following the quake, after which 17 people were missing, Peru's health minister said.

Several homes were affected and the the count of victims and injured would probably rise, according to Jorge Chavez, chief of Peru's Civil Defense Institute.

As the world's No. 2 copper producer, Peru locates most of its mines in the south far inland from the coastal region where earthquakes are common.

The quake was also felt in northern Chile, Peru's southern neighbor. Chile's National Emergency offices said there were no reports of injuries, damage to infrastructure, or interruption of basic services.