HEADLINE 2017 in review: 8 terms that matter in China-US relations

The year 2017 has been an exciting and action-packed one for China and the United States, with both countries interacting closely at different levels in multiple fields.

The following are eight terms that can offer a sneak peek at the trajectory of China-US ties over the year, and beyond.

In April, Chinese President Xi Jinping and his US counterpart, Donald Trump, met at Mar-a-Lago resort in Florida, the first such meeting since Trump took office in January.

Disposing with the formality usually seen during state visits, the two leaders spent more than seven hours in two days, discussing issues of importance and charting the course for one of the world's most crucial bilateral ties.

Recent years have seen Chinese and US leaders meeting in relatively informal settings, but this does not make those meetings any less significant.

A personal bond was forged between the two leaders during the Mar-a-Lago meeting, which sent a positive and reassuring message to the world that the two largest economies were seeking constructive cooperation despite their differences.

As Xi said, "There are a thousand reasons to make the China-US relationship work, and no reason to break it."

On Nov. 8, Trump started his first state visit to China. He was also the first head of state to have visited China since the 19th National Congress of the Communist Party of China in October.

Trump was offered a "state visit plus" experience in China. Apart from the red-carpet ceremony, formal talks and state banquet, there were also special arrangements for Mr. and Mrs. Trump, including a tour of the Palace Museum with President Xi and his wife Peng Liyuan.

The First Family enjoyed a tea break, a stop at a relics conservation workshop and a Peking Opera performance at the Palace Museum, also known as the Forbidden City.

"THANK YOU for an unforgettable afternoon and evening at the Forbidden City in Beijing, President Xi and Madame Peng Liyuan," Trump tweeted shortly afterwards. He also briefly changed his Twitter header to a photo of the two couples with a group of Peking Opera performers.

During Trump's stay in China, the two leaders spent more than 10 hours together, comparing notes on a wide array of issues of common concern. Extensive consensus was reached and their personal rapport strengthened.

China and the United States have seen headway made in implementing four high-level dialogue mechanisms designed to increase China-US contact and cooperation in the key areas of diplomacy and security, economy, law enforcement and cyber security, as well as social and people-to-people exchanges.

The mechanisms, initiated during the Mar-a-Lago meeting in April, have provided opportunities for Chinese and American officials to talk over significant issues ranging from peace and stability in the South China Sea and military-to-military exchanges, to innovation cooperation and cyber crime.

Heartening results have been delivered. As a case in point, China and the United States have agreed to adopt a "double 100,000" two-way overseas study plan, which will allow China to send 100,000 government-sponsored people to study in the United States and permit 100,000 US students to study in China in the next four years.

Besides three formal face-to-face meetings, with the second taking place in Hamburg, Germany in July, the top leaders of China and the United States have also maintained close communication through phone calls.

In 2017, nine phone calls were made between the two leaders to exchange views on issues not only significant for bilateral ties but also for the world at large, including the situation on the Korean Peninsula, Syria and global economic growth.

Experts believe top-level communication is crucial to the sound growth of China-US relations. Continuous and in-depth communication between the leaders could prevent misunderstanding, build trust, manage differences and increase cooperation.

It is in the interest of the international community that China and the United States jointly address global challenges.

In 2017, the Democratic People's Republic of Korea (DPRK) has pushed ahead with its nuclear program and conducted a number of missile launches, heightening tensions on the Korean Peninsula and prompting the international community to collaborate to find a solution.

With six-party talks yet to be resumed, efforts made by China and the United States, either separately or collaboratively, have become all the more important.

Chinese leaders and officials have on many multilateral and bilateral occasions reaffirmed China's commitment to denuclearization, peace and stability on the Korean Peninsula. China is also a firm advocate of resolving the nuclear issue through dialogue and negotiations.

To this end, China has done a lot of work, including proposing a dual-track approach and "suspension for suspension" initiative, as well as communicating closely with the American side.

State visits have proved to be a boon to trade ties between the world's two largest economies, evident by the 100-day action plan initiated during the Mar-a-Lago meeting and 250 billion US dollars' worth of deals signed by Chinese and US companies during Trump's visit to China.

The 100-day action plan designed to boost bilateral economic cooperation has yielded tangible results, including a deal to reopen the Chinese market to US beef in July.

American beef is now back on restaurant menus in China. In November, Chinese e-commerce giant JD.com and the Montana Stockgrower's Association inked a 300-million-dollar beef deal.

The bilateral trade volume between China and the United States exceeded 550 billion dollars in 2016, according to figures from the Chinese Ministry of Foreign Affairs. Despite occasional setbacks it is believed that huge potential for China-US trade cooperation waits to be tapped.

China and the United States have seen exponential growth of two-way investment in recent years, with the figure surpassing 200 billion dollars last year.

Chinese companies invested a record 46 billion dollars in the United States in 2016, a tenfold increase compared to just five years ago, according to a report jointly released by the Rhodium Group and the National Committee on US-China Relations.

The report also showed that the cumulative value of US foreign direct investment in China since 1990 has exceeded 240 billion dollars.

People in both countries stand to benefit from the huge amount of capital flows.The US-China economic relationship supports roughly 2.6 million jobs in the United States across a range of industries, among which about 104,000 jobs are created by Chinese investment, a study conducted by Oxford Economics and the US-China Business Council showed.

Arabella Kushner might be more popular in China than her grandfather Donald Trump.

During his state visit to China, Trump proudly showed the Chinese president a video of Arabella singing and reciting poems in Mandarin. The video later became a hit on the Internet in China, as did another video of Arabella showing off her Mandarin skills back in 2016. 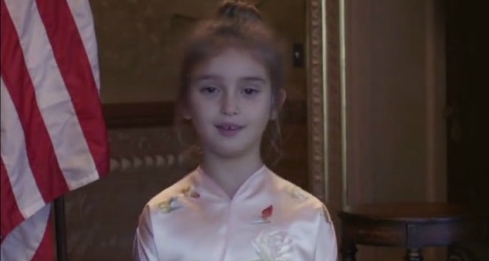 Screenshot of a video of Arabella singing and reciting poems in Mandarin (Photo: Xinhua)

The American investor guru said he always told anyone who would listen that they must teach their children Mandarin because it would be the most important language of their lifetime.

The year 2017 has seen an increase in the popularity of Mandarin in the United States. According to a national survey conducted by American Councils for International Education and released in June, 227,086 US students ranging from kindergarten to grade 12 had enrolled in Chinese language courses.

The number of young Americans studying Mandarin doubled from 2009 to 2015, the survey found.