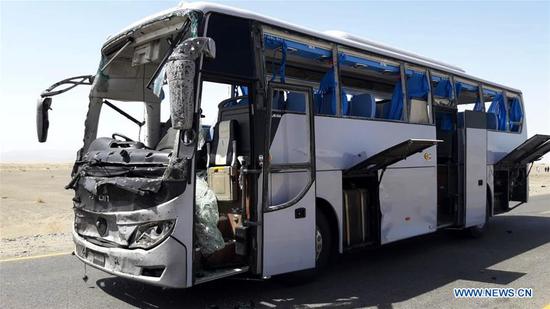 A damaged bus is seen at the site of a suicide blast in Pakistan's southwestern Balochistan province on Aug. 11, 2018. A suicide attack injured six people including three Chinese workers here on Saturday, the Chinese Embassy to Pakistan said. (Xinhua/Stringer)

"The Embassy and Consulates General of China in Pakistan strongly condemn the violent attack in Balochistan today, and express our sincere sympathy to the injured from both countries," the Chinese Embassy and the Chinese Consulate General in Karachi said in a statement.

The Chinese side has requested Pakistan to investigate the incident, bring the perpetrators to justice and take further effective measures to ensure the security of the Chinese institutions and citizens in Pakistan, the statement added.

The suicide blast shattered the windows of the bus ferrying the Chinese workers in Dalbandin, about 340 km southwest of the provincial capital of Quetta.

A local administrator of the region Sardarzada Saif Kethran said that the incident took place when a suicide bomber exploded his explosives-laden small truck near the bus carrying Chinese workers from Saindak Copper- Gold Mines project to the airport in Dalbandin, a city in Chagai district of the country's southwest Balochistan province.

According to another local official, three Chinese nationals, two security personnel, and a civilian driver of the bus were among the injured.

Personnel of security forces convoy which was providing the security to the bus shifted the injured to the nearby hospital. All the injured are in stable condition.

Muhammad Ibrahim, the driver of the ill-fated bus, told media that he saw a suspected minitruck on the roadside little ahead of his bus, adding "I pressed the emergency brakes when the truck moved little. As I pressed the brakes the truck exploded with a big bang."

The visuals and pictures of the bus showed that its front side got affected by the blast. The driver said that if he did not press the brakes, there might be a huge loss.

The security forces cordoned off the area and started a search operation in the region.

A miscreant group of Baloch nationals claimed the attack.

Pakistan's Ministry of Foreign Affairs strongly condemned the terrorist attack on the Chinese engineers and their accompanying security personnel.

In a statement, Foreign Ministry spokesperson Mohammad Faisal said that all of the injured are stable and being treated.

"Pakistan remains unflinchingly undeterred in the face of such dastardly terrorist acts," the statement said.