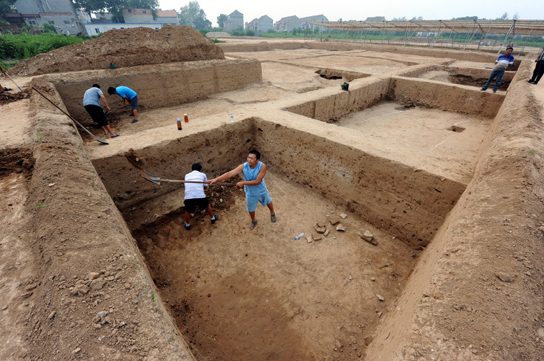 China on Friday nominated the 5,000-year-old city of Liangzhu as a UNESCO World Heritage program of 2019. The Liangzhu archeological site was found in 1937, but the city was not discovered until 2007 in Hangzhou, capital of East China's Zhejiang Province. In 2015, archeologists digging in Hangzhou's Yuhang district found a large water project while excavating the neolithic remains of the ancient city. It is believed to be the world's earliest water conservation system, the Xinhua News Agency reported.More staggering finds were to follow. Archeologists discovered ancient Liangzhu residents were writing 5,000 years ago. The discovery moved the history of the Chinese written language back 1,000 years, according to xuexixiaozu, a People's Daily-related WeChat account on Friday.The ancient city sits in a wetland environment on the plain of a river network between the Mount Daxiong and Mount Dazhe of the Tianmu Mountain Range, according to the UNESCO website introduction."It is an outstanding representative of large settlement sites in East Asia along the history of human civilization and is well preserved with authenticity and integrity," the UNESCO statement reads. The nominated area includes the ancient city, Liangzhu's Yaoshan altar-tomb sites and 11 dikes, Zhejiang News reported.