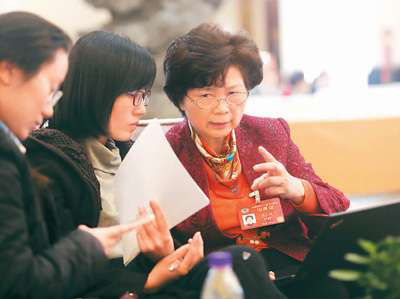 More and more women are participating in political affairs in China. (Photo by Xu Ye from People’s Daily)

A total of 551 female delegates have been elected to the 19th National Congress of the Communist Party of China (CPC) to be started on October 18th in Beijing, accounting for 24.1% of the total 2,287 representatives.

The ratio is 1.1 percentage points higher than the figure 5 years ago when the CPC held its 18th National Congress.

The proportion rise came as more and more Chinese females have scored success after engaging in political careers.

Women’s participation in political affairs is an important index to measure a country’s democratic progress. The changes can be attributed to China’s great efforts in recent years to promote gender equality and protect women’s rights and interests.

The anti-domestic violence law implemented by China starting from March 2016, for instance, has provided the women with a new weapon to protect their personal rights.

By the end of this June, a total of 322.11 billion (about $49 billion) of female-exclusive start-up loans has been granted to about 5.89 million women.

With improved protection over their rights and interests, Chinese women are playing a more important role in national development.

Females accounted for 42.9% of the total employees in China, and 55% of the Internet entrepreneurs were women.

Besides, 66% of the Chinese medalist in Rio 2016 Summer Olympics were female athletes.

The country will make more efforts in the future to solve the existing problems for women in marriage, employment, social security, land rights and interests, as well as personal rights, vowed Shen Yueyue, president of the All-China Women's Federation (ACWF).