HEADLINE 7 hospitals in Gaza shut down due to power shortage

7 hospitals in Gaza shut down due to power shortage 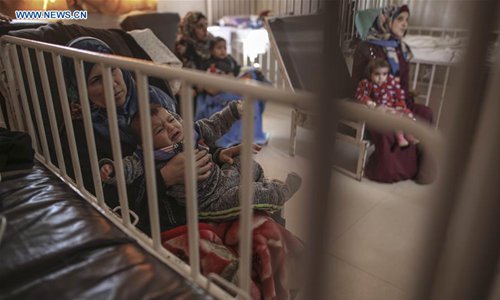 A Palestinian woman holds her child at AL Durra Hospital in Gaza Strip, on Jan. 31, 2018. Seven hospitals in the Gaza Strip were forced to suspend services because of the power shortage, the health authorities in the Palestinian enclave said Wednesday. (Xinhua/Wissam Nassar)

Seven hospitals in the Gaza Strip were forced to suspend services because of the power shortage, the health authorities in the Palestinian enclave said Wednesday. The Crisis Management Committee in the Health Ministry in Gaza appealed to donors for immediate intervention, citing the health crisis in the enclave has entered an unprecedented stage. On Sunday, the ministry warned that a number of medical centers could be shut down due to the power shortage. Gaza's hospitals usually need 450,000 liters of fuel a day to cover the eight to 12 hours of power outage. But the demand for fuel could double as the power outage can last as long as 20 hours in some areas. Diesel needed for generating power during the one-hour outage costs 2,000 US dollars, the ministry noted. The chronic energy crisis in the Israeli-blockaded Gaza Strip has forced local authorities to adopt a rotation system by which power is cut in some parts of the enclave to ensure supply to other areas. Currently, Israel provides Gaza with 120 megawatts of electricity while Egypt provides 32 megawatts. On the other hand, the Ramallah-based Palestinian Authority accuses Hamas, which has been in control of Gaza since 2007, of "fabricating and aggravating the crises" due to its inability to fully manage the area.