HEADLINE 7 killed as bus plunges into gorge in northern India

7 killed as bus plunges into gorge in northern India

At least seven people were killed and 12 others injured after a bus rolled down into a gorge in northern Indian state of Himachal Pradesh, police said Sunday. 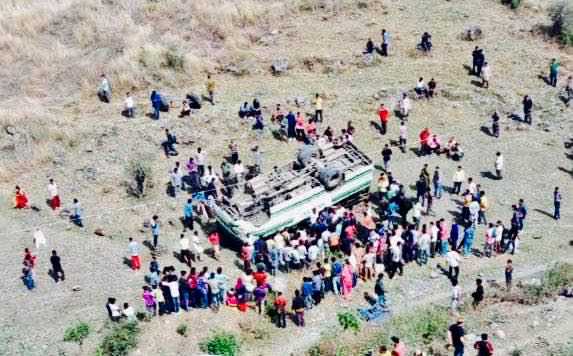 Over 20 passengers were travelling in the bus at the time of the mishap. / Tribune photo

"The bus plunged into the gorge after its driver lost control of the speeding vehicle and swerved off the mountain road while negotiating a curve," a police official said.

Rescue teams have reached the scene and recovery operations are under way, he said.

"While seven bodies have been pulled out of the mangled remains of the bus, those injured have been admitted to a nearby hospital, where the condition of some are serious," the official said.

The bus, carrying nearly 20 people, including a driver and a helper, was on its way to Rajgarh when it met with the accident.

A probe has been ordered into the incident, he added.

India has the highest number of road fatalities in the world. Road accidents occur mostly due to poor driving or badly maintained roads and vehicles.