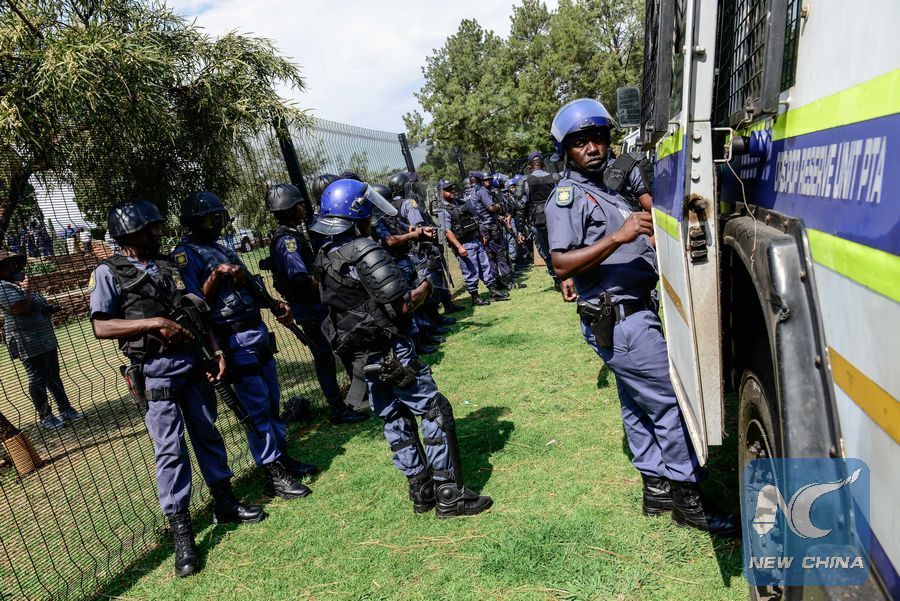 Police officials in front of the fence outside the Union Buildings, the official seat of the South African government, in Pretoria, on Oct. 20, 2016. File Photo: Xinhua/Zhai Jianlan

The acting National Head of the Directorate for Priority Crime Investigation, Lieutenant General Yolisa Matakata, said on Friday that about 92 public officials have been arrested for committing crimes since November 2017.

The crimes range from corruption, armed robbery and theft, among others. These include 28 police officers, 45 traffic officers, six home affairs officials and other government officials including those from municipalities. Matakata expressed concern over the "alarming rate" on the number of public officials caught on the wrong side of the law.

"Our country has long suffered from a perception that it is a highly corrupt country. We cannot allow corruption to eat at the very foundation of this country and we cannot turn a blind eye to it," said Matakata.

She stated that those entrusted with running government affairs must do so with honour and integrity, adding public officials must be beyond reproach to maintain public confidence in the government. She said her sector will ensure that government institutions are accountable.

Matakata said, "The integrity and reputation within our government system must never be undermined and must remain a competitive edge and a source of pride for our citizenry. The war on corruption cannot be left to governments alone. The task of civil society and the press is vital in highlighting corruption, reshaping attitudes and reversing public apathy toward corruption."

She said their task on arresting corrupt officials is not yet done with the arrest of the 92. Matakata warned that those who think they can beat the system will be arrested and punished according to the law.

She stated, "And the law must be applied the same regardless of status or any other consideration. Corruption is a scourge that can never be tolerated. I thank those who report corruption, they help us in our quest to ensure clean governance and to root out dishonesty in the public service."