Two train stewards provided Yang with a warm meal while authorities looked for his bag.

A lost shoulder bag, with a huge amount of money and several important certificates, was returned to its owner Mr.Yang, an old-aged migrant worker, after local authorities' two-day-long seeking efforts.A train attendant found the bag under the bench when he routinely examined the waiting room at 9:30 p.m. Thursday, the first day of chunyun, China's spring festival travel rush. Inside the bag were, a big sum of cash worth 25,480 yuan(4,076 US dollars), which might mean a total salary earned by a migrant worker in a whole year, and identification cards, health care cards etc. On-duty police were called to help identify the owner, but it was difficult since he carried no cell phone.The health care card did a favor, through which they contacted Mr. Zhang, a son-in-law of the owner."My uncle, 66 years old, struggled with a sever amnesia and left hometown to work for some years," said Zhang. "last month he told us that he would get back for Spring Festival, China’s Lunar New Year, after obtaining his one-year earnings. However such a tragedy befell him." 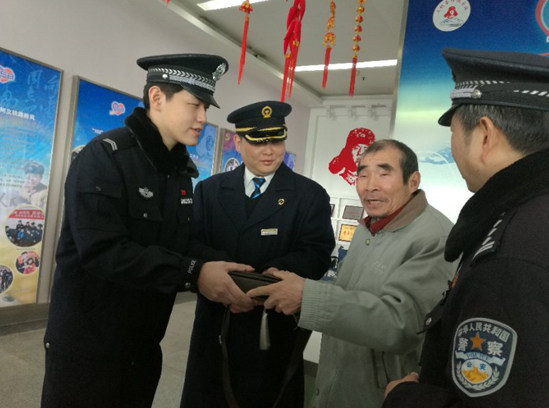 Ater a two-day search, authorities found Yang's bag and returned it to him.

The rescuing staff found out the train Yang boarded through his lost ID information. A further conclusion came that Yang departed from Wuxi to Nanjing, both in Jiangsu Province, at 5:40 p.m. Thursday. On Friday morning, messages calling for public to identify and find out the elder owner circulated on as many online platforms as possible, including Sina Weibo (China's version of twitter), WeChat (an equivalent of Whatsapp), also via traditional media like newspaper and televisions.Simultaneously, searching work offline continued as well, with local security staff going door to door for clues. Good news came, at 4 p.m. Saturday, that Yang was targeted in Nanjing Railway Station. Emergency staff were dispatched timely for a overall inspection of Yang's health. Then they returned the bag and arranged to send him back home. A 43-hour-long searching campaign, though amid the travel rush, ended up with what Chinese netizens called "a warm-hearted public service relay", owing to a joint effort of local authorities among Wuxi, Nanjing and Shanghai.