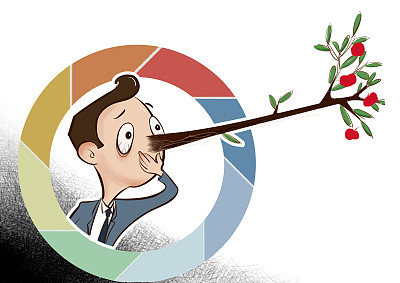 Taking a selfie and then posting it on social media is nothing abnormal for people living in this digital age, but a newly revealed profit chain will probably make us have second thoughts before pressing the "post" button.

Someone is using my face for online dating?
Val is a young pretty girl who often shares her photos, especially selfies, on Wechat moments. A message Val (alias) recently received on Weibo, and the following conversation, created ripples in her life. Until this moment, Val didn't realize her private photos had been illegally sold online.

The man who contacted Val, sent photos of Val herself, but claimed the photos belonged to his girlfriend. Getting her mind around the shocking photos, Val managed to grasp what happened: the man, a victim too, had been dating this woman, who obviously is not Val, online for more than a year. During their relationship, the woman had been deceiving him with Val's photos.

With the contact information provided by the man, Val even got in touch with this woman. To Val's surprise, the woman admitted her fraud bluntly and said “I meant no harm, just borrowing your photos, and it caused you no loss. I think he likes your type, I can let you have him if you don’t have a boyfriend.”
Online dating has become more and more acceptable nowadays, to acquire a better chance in dating, many choose to polish their personal information through exaggerating income, making up non-existent experience or using altered photos. The female masquerader in Val's case apparently has gone farther.

Media also unveiled user's personal photos also facilitate crimes. On the Chinese instant messaging app Wechat, some misconducting “Weishang”, i.e. merchant on Wechat, disguise themselves as successful ones to promote products, most of which, if not all, are faked or of poor quality or come from unreliable sources. Photos of good-looking females are ideal tools for Weishang to shape their glowing, but fake, appearance. Thus anyone's face could aid crimes while he or she does not notice it.

A question troubling Val is why the man was deceived for so long. As the investigation by media goes deeper, the answer is more than “love is blind”.

The scale of infringed personal photos may exceed imagination. By searching keywords “daily-life photo” on a famous online shopping website, a huge number of photo packages, marked with combinations of letters and numbers, are publicly sold online. The packages contain hundreds to thousands of unauthorized personal photos. In the picture above, a package including 3,000 photos is sold for 5 yuan ($0.80). The seller also bragged there are tens of thousands more on QQ-zone.

There is a reasonable speculation that only the photos acquired at a low cost and the continuous demand for them keeps these online shops running.
To make photos even more flawless, sellers also offer “updating service” that buyers will get new photos as long as new posts are released. Some sellers provide the original social media page for buyers to download preferable photos. It should be noted that none of these procedures have the original owner's consent.
Sharing personal information, not a chance! Sharing photos, why not?
In recent years, Chinese internet users have gained awareness of personal information protection, particularly after the tragedy to Xu Yuyu who died of heart failure after getting all her tuition swindled. The fraud purchased Xu’s detailed information, which made it too difficult to recognize the hoax.
The determination of the Chinese to protect private information can be observed through the online uproar triggered by Li Yanhong. Li, founder of Baidu, suggested Chinese people are happy to give up their data privacy for online convenience or efficiency under many circumstances."Typical of Baidu acting with pride rather than a sense of shame (when it comes to) trampling on people's private information," a netizen commented on Sina Weibo.
While the issue on sharing photos seems ambiguous. It is obvious few would deliberately put personal information online, because potential leaking and the information itself has little worth for sharing. Contrarily, sharing personal photos on social media is a habit many Chinese use to not only show off their pretty faces, but also their daily life by marking and commemorate important moments, this is exactly why less consideration is given before posting photos.
It is not fair to blame photo owners for sharing and it is even more unrealistic to restrict sharing in the name of personal information security. However there is much to be done in building a safe environment for shared photos, which demands the seamless efforts of supervisory authorities, online shopping service providers and a legal aid system, so that the profit chain can be devastatingly destroyed, victims can gain access to necessary aid in pursuing legal compensation and more importantly, can keep personal photos from being an accomplice of crime.
Solid measures have been taken by the online shopping website accused of conniving the trade of infringed photos, the controversial items have been pulled off shelves.