A wave of panic rattles Hawaii after false missile alert 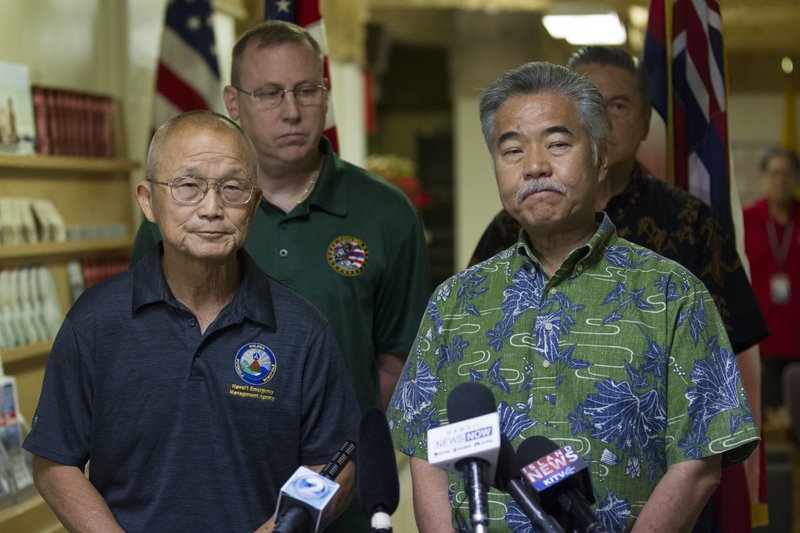 The second recent blunder in Hawaii’s planning for a possible North Korean nuclear attack left islanders shaken after an emergency alert warning of an imminent strike sounded on hundreds of thousands of cellphones.

For nearly 40 minutes people waited. Then came the second mobile alert: someone hit the wrong button, there was no missile.

Some people abandoned cars on the highway and others gathered in the interiors of their homes to wait for what seemed like the inevitable, a blast that would cause widespread death and destruction.

The message sent statewide just after 8 a.m. Saturday read: “BALLISTIC MISSILE THREAT INBOUND TO HAWAII. SEEK IMMEDIATE SHELTER. THIS IS NOT A DRILL.”

The Hawaii Emergency Management Agency’s administrator, Vern Miyagi, said he took responsibility for the mistake. He said officials would study the error to make sure it doesn’t happen again.

The state adjutant general, Maj. Gen. Joe Logan, said a written report would be prepared. State lawmakers announced they would hold a hearing next Friday. And Federal Communications Commission Chairman Ajit Pai said on social media the panel would launch an investigation.

The backlash from lawmakers was swift.

“Clearly, government agencies are not prepared and lack the capacity to deal with emergency situations,” he said in a statement.

“There needs to be tough and quick accountability and a fixed process,” he wrote.

“This false alert is detrimental to the integrity and trust of the emergency management system,” said state Sen. Donna Mercado Kim.

The Hawaii Emergency Management Agency tweeted there was no threat about 10 minutes after the initial alert, but that didn’t reach people who aren’t on the social media platform. A mobile alert informing of the false alarm didn’t reach cellphones until about 40 minutes later.

Many people said they are resigned to the fact that there is little they can actually do if a missile was to be launched toward the remote island chain, especially with only about 15 minutes of warning time for a strike from North Korea.

Joseph Kira was home with his kids when the alert came. His wife was at the gym.

“My wife was going ballistic,” he said. “At that point, you just pray and find God, I guess.”

With the threat of missiles from North Korea on people’s minds, the state reintroduced the Cold War-era warning siren tests last month that drew international attention. But there were problems there, too.

Even though the state says nearly 93 percent of the islands’ 386 sirens worked properly during the December test, 12 mistakenly played an ambulance siren. In the tourist hub of Waikiki, the sirens were barely audible, prompting officials to add more sirens there and reposition ones already in place.

Mary Hirose was with her children at an ice skating arena in Honolulu when the alert came.

“Here, there is nothing you can do,” she said. So, she grabbed her four children held them close, listened to the news and hoped for the best.

She questioned why it took civil defense so long to send out the all-clear and why they tweeted before sending a mobile push alert.

Hawaii officials apologized repeatedly and said the alert was sent when someone hit the live alert button instead of an internal test button during a shift change.

“Today is a day that most of us will never forget,” said Hawaii Gov. David Ige. “A day when many in our community thought that our worst nightmare might actually be happening. A day when many frantically tried to think about the things that they would do if a ballistic missile launch would happen.”

The agency did not have a plan for a false alarm in place, officials said.

“I am sorry for the pain and confusion it caused,” he said. “I, too, am extremely upset about this.”

On the H-3, a major highway north of Honolulu, vehicles sat empty after panicked drivers ran to a nearby tunnel for shelter, the Honolulu Star-Advertiser reported. Workers at a golf club huddled in a kitchen fearing the worst.

Professional golfer Colt Knost, staying at Waikiki Beach during a PGA Tour event, said “everyone was panicking” in the lobby of his hotel.

“Everyone was running around like, ‘What do we do?’” he said.

Homeland Security Secretary Kirstjen Nielsen said Sunday on “Fox News Sunday” that people should still abide by alerts and the blunder was “a very unfortunate mistake.”

The White House said President Donald Trump, at his private club in Florida, was briefed on the false alert. White House spokeswoman Lindsay Walters said it “was purely a state exercise.”