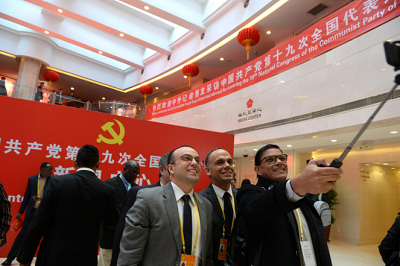 Foreign journalists take photos at the Press Center of the 19th National Congress of CPC in Beijing on Wednesday. Photo: The Paper

More than 1,800 foreign journalists gathered in Beijing to report on the event, indicating a global common interest to know more about China.

The session will set the course of China's development for the next five years and lead China into a new era this week. It is a grand event that will change the global landscape.

US political and economic commentator Robert Lawrence Kuhn wrote that the world has to understand the long-term governance of the CPC is the best choice for China's development.

After the visit, a journalist from Afghanistan said the CPC is a diligent Party, which always seeks benefits for its people and has the power to conquer anything. That's the reason why China could obtain its place today.

The CPC Central Committee, with Xi Jinping at the core, faced profound changes with international situations, national and Party conditions, and have braved the difficulties and forged ahead in the past five years.

A journalist from Thailand could not help asking, “Reform has never been easy. Why could China make it, while many other countries always end up giving up halfway?”

They had a clearer understanding of China's dynamic economy after visiting Lujiazui in Shanghai, Hong Kong-Zhuhai-Macao Bridge in Guangdong Province and Alibaba Group in Hangzhou, Zhejiang Province. Participants expressed their excitement after watching the large-scale exhibition of "Five Years of Progress."

A journalist from Jordan News Agency said, "The leadership of CPC contributes to these achievements. They have made a series of wise policies."

US media commented that the ongoing 19th CPC National Congress would exert significant influence on the 1.3 billion Chinese people, China, and the whole world as well.