ABC News' chief anchor ‘stunned’ in his interview with Comey

ABC News' chief anchor George Stephanopoulos says at times he was "stunned" with his exclusive interview with James Comey, the fired FBI director.

"I've never had an interview like this. Never like this, that was this intense, potentially this consequential and where I was as surprised as I was by what I heard," he said. 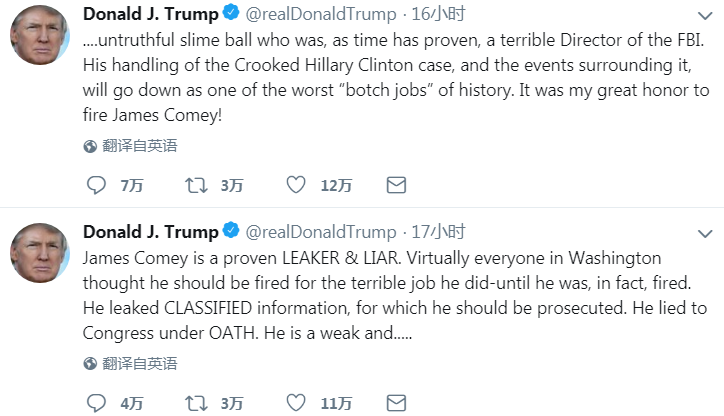 In the interview, Comey talked about his encounters with US President Donald Trump in 2017, which invoked Trump’s response on Twitter, attacking Comey as a "weak and untruthful slime ball."

The interview involved talks over the "dossier," which alleges that Trump engaged in a sexual encounter with prostitutes during a 2013 trip to Moscow. Comey said Trump mentioned the dossier, and might order him to investigate that.

"If there's even a 1 percent chance my wife thinks that's true, that's terrible,” Trump told Comey about the allegation.

"I said to him, 'Sir that's up to you but you want to be careful about that because it might create a narrative that we're investigating you personally and, second, it's very difficult to prove something didn't happen," Comey said.

Comey said he tried to tell Trump that he didn’t know if the allegations were true, but wanted to inform the president that the FBI had the information.

The conversation, Comey said, was “really weird,” resulting in what the then-FBI director called an “almost out-of-body experience.”

For the information about alleged Russian interference in the 2016 election, Trump seemed less concerned about the interference itself than its harms on his election, according to Comey.

In Trump’s meeting with a group of intelligence agency leaders, including Comey, the content was all about what Russia did and how it possibly effected the election, Comey said.

The meeting did not involve what measures should be taken to prevent Russia from doing this again in the future, he added.

On April 17, Comey will release his book “A Higher Loyalty: Truth, Lies and Leadership,” which talks about his opinions on controversial events surrounding his firing by Trump and the Russia and Hillary Clinton email investigations.