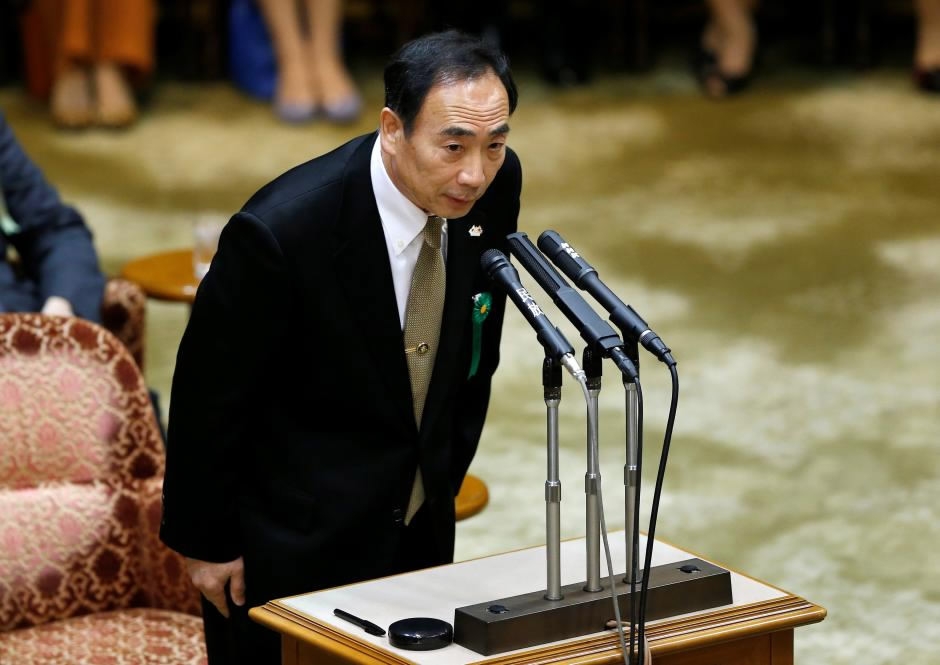 Japanese Prime Minister Shinzo Abe was back under fire amid stepped-up calls for his resignation after the Finance Ministry on Monday admitted to knowingly altering documents on a cut-price land deal scandal implicating Abe and his wife Akie.

More than 1,000 people gathered in front of Abe's office Monday evening, shouting "No more lies" and "Don't falsify documents" and calling for the prime minister and his close ally Finance Minister Taro Aso to step down to take responsibility.

The cut-price land deal scandal implicating Abe, which first came to light in February last year, has drawn renewed attention recently after local media reported that some Finance Ministry documents linked to the dubious deal appeared to have been revised in an apparent attempt to cover up the scandal.

The Finance Ministry admitted Monday that 14 of the original documents were altered at the instruction of some officials in the ministry before they were submitted to parliament for scrutiny last year.

In the revised version, portions were deleted from the original one that quoted Moritomo Gakuen, a private school operator which was planning to build an elementary school in Osaka, as saying that Akie Abe recommended the project and that she had also inspected a right-wing kindergarten operated by Morimoto Gakuen and gave a speech there in April 2014.

Expressions that describe the heavily-discounted land sale as "special" and "exceptional," along with names of several senior politicians, and parts that mention Abe's support for Nippon Kaigi, or Japan Conference, a far-right wing nationalist group which head of Morimoto Gakuen claimed to have links to, were also scrapped.

Aso, who doubles as deputy prime minister, said that only some of the Finance Ministry officials were involved in alteration of the documents and that he has "no intention" to resign.

Abe apologized Monday afternoon as "head of the administration" after the revelations were made public, but indicated his support for Aso by saying that he hopes Aso would lead efforts to "look into why such a thing happened" to regain public confidence.

Abe has told parliament last year that he "would quit as prime minister and as a Diet member" if he or his wife Akie was found involved in the dubious land deal.

Japanese opposition parties, meanwhile, called for further probes into the scandal and demanded Akie and Nobuhisa Sagawa, former National Tax Agency head who resigned last week due to links to the scandal, to testify in parliament.

Renho, an upper house lawmaker from the opposition Constitutional Democratic Party of Japan, said that it has to be explained why Akie's name was scrapped from the documents submitted to parliament, and Akie has to testify in the parliament.

Yuichiro Tamaki, head of the Party of Hope, said that it was a serious matter that could be regarded as a historical stain and Aso should definitely step down, while the opposition parties will also discuss putting forward a motion of no confidence against Abe's cabinet.

Criticism was also building up even within the ruling parties, as Toshihiro Nikai, secretary general of the ruling Liberal Democratic Party (LDP), told a press conference the filed doctoring was a serious problem that was beyond imaganiation and could not be explained simply as a mistake.

Natsuo Yamaguchi, head of the LDP's junior coalition partner Komeito party, said that he was deeply sorry for the document falsification which led to loss of trust in the government and that the deed should by no means be tolerated.

Moritomo Gakuen, a private-school operator, reportedly bought a 8,770-square-meter piece of land in June 2016 in Toyonaka, Osaka prefecture, for 134 million yen (US$1.26 million), equivalent to only 14 percent of its appraisal price.

The land had been intended for a new elementary school to be opened in April last year with Abe's wife Akie as its honorary principal, though she has since stepped down as the scandal widens.

The prime minister has since denied that he or his wife was involved in the shady deal, while Yasunori Kagoike, head of the school operator, gave sworn testimony in both chambers of parliament, stating that he believed the land deal involved "politicians' intervention."

The scandal has for one time drastically brought down the Abe administration's support ratings, and according to multiple media polls, the majority of those surveyed believed that the government had not given sufficient explanations on the scandal.

According to an opinion survey conducted from March 9 to 12 by public broadcaster NHK, support rate for the prime minister's cabinet dropped to 44 percent, down 2 percentage points from a month earlier, while the disapproval rate stood at 38 percent, up 4 points.