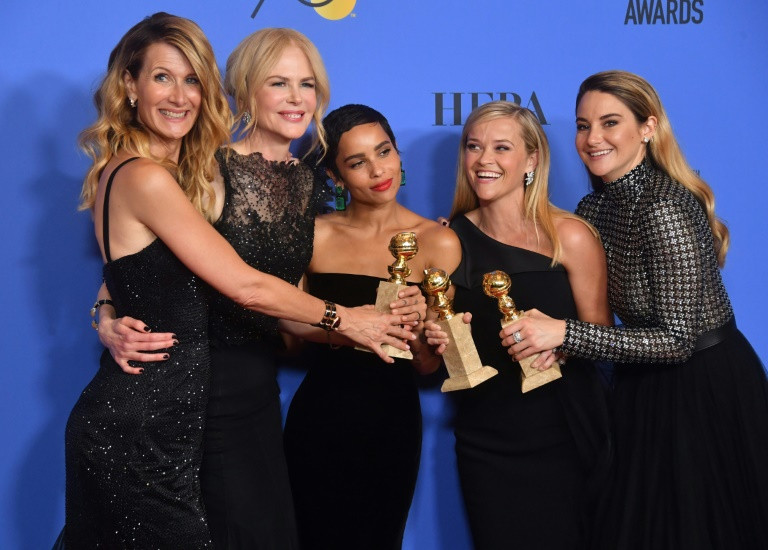 The Golden Globes on Sunday honored television shows tackling the abuse of women, with "Big Little Lies," a mini-series that highlights domestic violence, and the dystopian "The Handmaid's Tale" the night's big winners.

It also took home a trio of acting awards -- best actress for Kidman as an abused wife, best supporting actor for Alexander Skarsgard as her violent husband and supporting actress for Laura Dern, who plays a mother trying to find out who is bullying her daughter.

The HBO series, directed by Canada's Jean-Marc Vallee, was conceived as a seven-episode adaptation of Liane Moriarty's best-selling novel, but has been renewed for a second season after taking home eight Emmys in September.

It aired amid a growing societal focus on the treatment of women as the #MeToo movement gathered force following revelations of chronic sexual harassment by Hollywood mogul Harvey Weinstein and others.

"This character that I played represents something that is the center of our conversation right now -- abuse," Kidman said as she accepted her fourth Golden Globe.

"I do believe, and I hope, we can elicit change through the stories we tell and the way we tell them. Let's keep the conversation alive," she said.

"Nicole, I love you. Thank you for making this the greatest experience of my career," he said.

"The Handmaid's Tale," a series about a misogynistic authoritarian regime that takes control amid a fertility crisis, won in the separate category of best television drama series with its star Elisabeth Moss taking best actress.

It was the latest victory for the series of on-demand service Hulu, which won five Emmys.

Moss paid tribute to Margaret Atwood, whose book was the basis for the series.

"This is for you and the women who came before you and after you who were brave enough to speak out against intolerance and injustice and to fight for equality and freedom in this world," Moss said.

"The Marvelous Mrs. Maisel," an Amazon Studios series about a woman who becomes an unlikely stand-up comedian after splitting with her husband, won best comedy or musical series, and its star Rachel Brosnahan won best actress.

"This is a story about a bold and brilliant and complicated woman, and I'm endlessly proud to be a part of it. But there are so many women's stories out there that need and deserve to be told," Brosnahan said.

Aziz Ansari won his first Golden Globe for best actor in a comedy for "Master of None," his series about the adventures of a struggling New York actor.

"I genuinely didn't think I would win because all the websites said I was going to lose," Ansari said.