Los Angeles (People's Daily) - In the Russian classic “Anna Karenina,” Leo Tolstoy wrote, “Happy families are alike; every unhappy family is unhappy in its own way.” Love can function as a catalyst or a remedy. It can heal wounds and help people rediscover happiness.

For an orphan, their life can change when they receive love and care from an adopting family.  And for families who adopt a child, their reward is happiness.

The Cloer Family: Silence is golden

The Cloer’s are a warm and unique family from Atlanta, Georgia.  Alicia Cloer (20), and her sister Olivia (18), are both in college.

“Confident and happy young women with a bright future,” said their mother Susan Cloer. The two girls are proud of their parents, and more importantly, they bring love, hope and light to the family.

Susan and her husband Ken both have dysaudia, a hearing disorder.

Susan explained how their hearing conditions created the foundation for adoption.  By the time the Cloers wed, they knew Susan was not suitable to give birth.

“We were open to adopting from various entities, agencies and races,” said Susan.

But despite their openness, their adoption applications were routinely denied by agencies all over the world.  Their hearing disabilities along with the fact that Susan was 15 years younger than Ken had a negative influence on the adoption process.

After a long delays and closer examination, it was the Chinese government who extended an olive branch to Susan and Ken, making their adoption dreams come true. 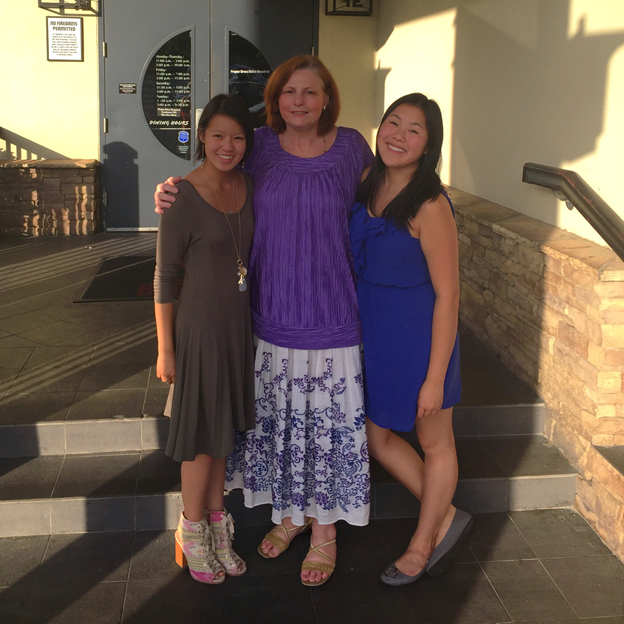 Susan and her daughters, Alicia and Olivia.

Susan and Ken traveled to China to adopt Alicia in 1998 when she was nine months old.  Years later they showed Alicia photos of the moment when they first held her for the first time.

Three years later the Cloers adopted a second Chinese girl, and named her Olivia.  Alicia was officially a big sister.

Olivia’s Chinese name is Zhenzhu, which means pearl.
Alicia’s Chinese name is Jianli. It was written on a letter tucked inside the box where she was discovered. Her last name, Wu, was given to her by the orphanage that took care of her before she was adopted. Cloer family kept this name to memorize this special experience.

The girls are both interested in Chinese culture.  Alicia is fascinated with Chinese cuisine and said, “I would like to learn how to properly cook Chinese food.”

“Both she and her sister represented their motherland cultural in various events, in schools, churches and other organizations. They always wore their authentic Chinese clothes, and carried a Chinese flag in parades and marches,” said Susan.

Alicia and Olivia have never returned to China, but that will change as they now have Chinese passports. The adoption agency who handled their cases enrolled them in Heritage Tour, that allows adopted Chinese and their parents to visit the country’s cities and orphanages.

“I hope I can visit China soon,” said Alicia. and

The girls are proud to be US citizens and are just as proud of their Chinese heritage.

Shay Shull is a famous chef and cookbook author with over two hundred thousand followers on Instagram.  And yet her greatest accomplishment is being the mother of four children.

Two of her children, both girls, she adopted in China.  Shull remembers every detail from when she went to get them.  Shull has been blogging about here little princesses, documenting their growth in her blog, “Mix and Match Mama.”

The blog is much more than an attempt to share her happiness with others. She uses it to educate those who are considering adoption in China.  She doesn’t hesitate to let everyone know that going to China to adopt a baby is the best trip a person can make.

Shay Shull is a famous chef and cookbook author with over two hundred thousand followers on Instagram.  And yet her greatest accomplishment is being the mother of four children.

Two of her children, both girls, she adopted in China.  Shay remembers every detail from when she went to get them.  Shay has been blogging about here little princesses, documenting their growth in her blog, “Mix and Match Mama.”

The blog is much more than an attempt to share her happiness with others. She uses it to educate those who are considering adoption in China.  She doesn’t hesitate to let everyone know that going to China to adopt a baby is the best trip a person can make. 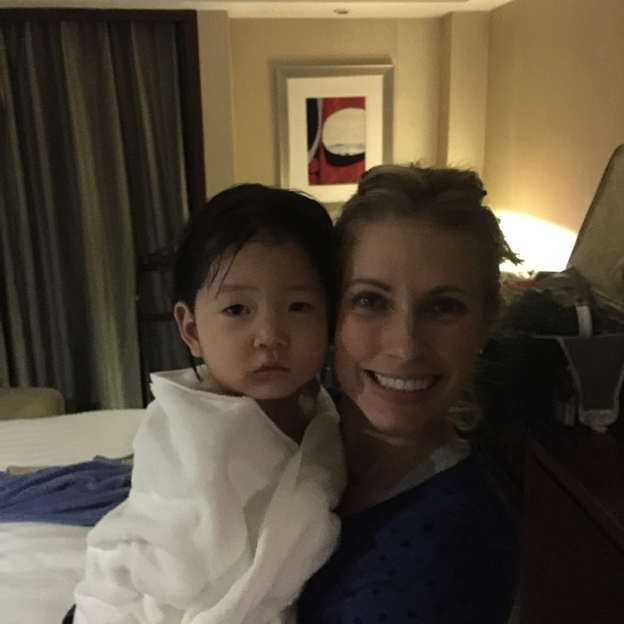 Ashby and Shay’s first day together.

“I was on cloud nine!” Shay said when talking about the day she met Ashby.

“Ashby likes vegetables. Ashby loves outdoor sports. Ashby invited her speech therapist to her birthday party,” reads Shay’s blog where she has recorded the special moments of Ashby’s life since she was eighteen months old.

Even though Ashby is an American citizen, Shay does everything she can to help her remain connected to her Chinese roots.

She makes it a point to tell Ashby when some excellent Chinese women appear in the media or on television.  One day they were at a restaurant that was showing a golf tournament on a television.

Ashby looked at the television and said, “She’s good!  She’s Chinese!” Shay was excieted about this monment. She hopes Ashby will find inspiration and encouragement from them. 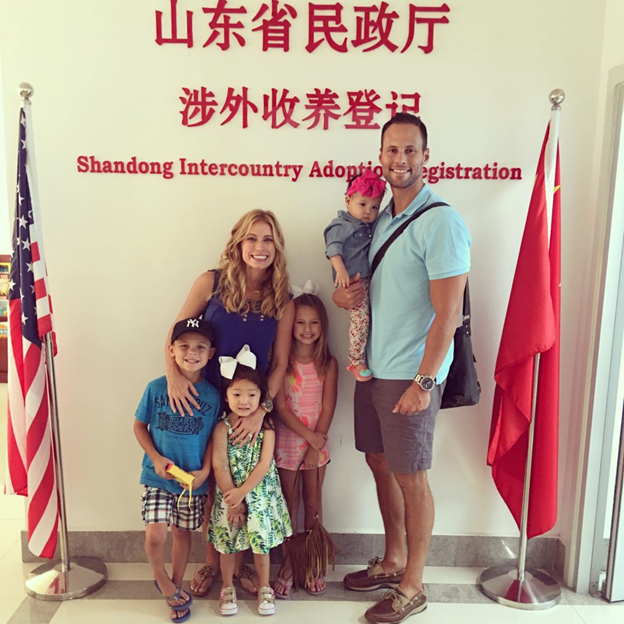 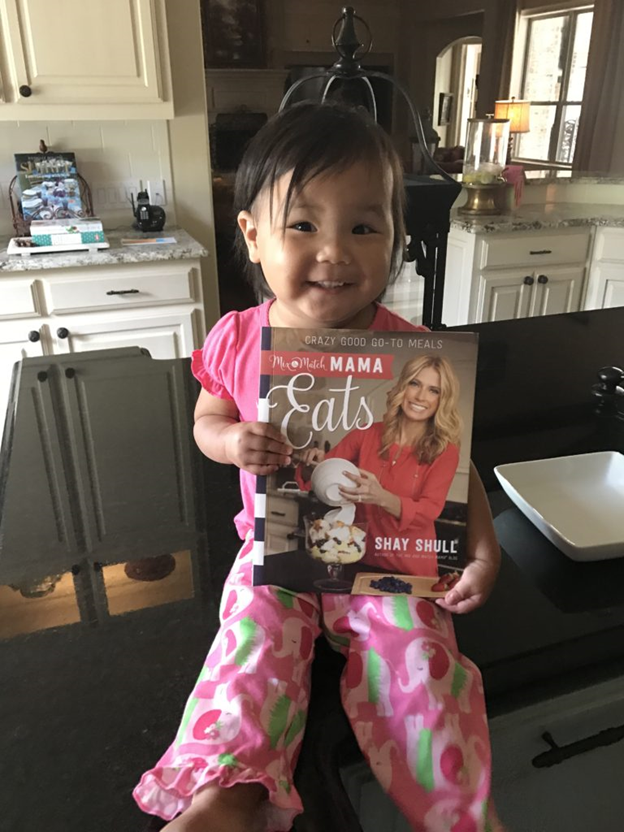 After Shay realized what a precious gift Ashby was, she decided the family needed a second Chinese baby.

Last year the Shull’s went back to China and adopted Madeley.  They tooks Ashby with them so she could witness the process.

In some countries the adoption process is long. The Shull’s had to wait 18 months before they could take Ashby to the US. But it was all worth it.

Shay also prepares many warm advice  and tips to families who are willing to adopt in China. For example, she uploaded the detailed luggage lists for the adoption trip to China on her blog. For her, adopting a child is a commitment one should enter blindly. However, it isn’t any different than having a child naturally.

According to latest statistics from the US State Department, there are 78,257 Chinese children adopted by American family from 1999 to 2016. With the development of Sino-US relations, this number will increase.

American singer Sheryl Crow once said, “Little souls find their way to you, whether they’re from your womb or someone else’s.” And although the Shull and Cloer families are different, one thing they have in common is the amount of happiness they’ve received since adopting a child.

As the famous saying goes, “Adopting a child will not change the world, but for the child and the family, their world will change.”