HEADLINE Advances in military technology give China edge in Asia-Pacific

Advances in military technology give China edge in Asia-Pacific 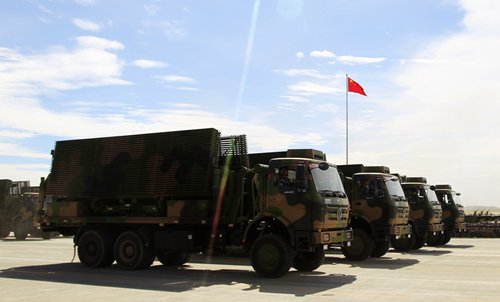 The pictured is early-warning radar in square formation during a military parade at Zhurihe training base in north China's Inner Mongolia Autonomous Region, July 30, 2017, to mark the 90th founding anniversary of the People's Liberation Army. (Photo: IC)

China has made significant achievements in radar and strategic bomber technology, according to scientists working in the fields, adding that its military radars can now detect all kinds of stealth fighter jets and bombers deployed in the Asia-Pacific region.Hu Mingchun, director of the No.14 research institute under the China Electronic Technology Group Corporation (CETC), and also a deputy of the National People's Congress, told the media, "China's radar technology is comprehensively approaching world-class level or is as advanced as foreign technology in general. Now we are at the stage of moving up to the leading role.""In some areas, China already uses the most advanced radar technology in the world, such as ship-based multi-function phased array radar and airborne early-warning radar," Chinese news portal thepaper.cn quoted Hu as saying on March 29.Growing challengesIn recent years, the US and its allies have deployed multiple stealth aircraft around China in the Asia-Pacific region.In October 2017, 12 F-35A fighter jets arrived in Japan, marking the US Air Force's first-ever F-35 deployment to the Asia-Pacific region, the Defense News reported.More F-35 will be deployed in the coming years, Jane's 360 reported."Since the US developed the F-117 in 1981, the increasing development and deployment of the stealth aircraft have brought serious challenges to other countries' homeland air defense," Hu said."Targeting the new generation of stealth aircraft's high-altitude, high-speed and advanced stealth capability, China's new generation of anti-stealth radar has been developed, and through practice, its capability in real combat has been proven. The technological competition between stealth and anti-stealth technologies will not stop in the long term," Hu noted.In November 2016, the CETC's anti-stealth radar YLC-8B, developed by the No.14 research institute, was displayed at the Airshow China 2016 in Zhuhai, South China's Guangdong Province. "China's anti-stealth radars can detect all kinds of stealth aircraft that the US has deployed in the Asia-Pacific region, including the F-22, F-35 and B-2, which means that when the US wants to use these aircraft to deter China, it has to take into consideration China's radar systems, because they will be detected by Chinese radars and shot down in real combat," Song Zhongping, a military expert and a commentator on Phoenix TV, told the Global Times.Early warningsIn addition to anti-stealth radar, China also possesses long-range early warning phased array radar, making it the third country after the US and Russia with the capability to conduct independent development of this kind of radar, Hu said. "This has laid a solid foundation for China's anti-missile early warning system."This kind of radar targets strategic threats such as incoming ballistic missiles, providing enough time for the system to intercept the missile, Song said. China has also made great strides in strategic bombers. The H-6k is not a newly developed bomber, but its increasing presence in the Asia-Pacific region shows that China is becoming more confident in using its strategic deterrence, said a scholar from a Beijing-based PLA military academy who requested anonymity."A nuclear power should have multiple strategic deterrence measures including land-based ballistic missiles, nuclear submarines and strategic bombers. Although currently the H-6k is not at the same level as the US and Russia's most advanced stealth strategic bombers, it's enough for China to deter secessionists in Taiwan since it can carry bombs and cruise missiles to strike military targets on the island from all directions," he noted.   According to the Xinhua News Agency, He Shengqiang, head of the team responsible for the H-6k's development under the Aviation Industry Corporation of China, said, "H-6k's capabilities on information countermeasures and awareness have already reached the level of third and fourth generation bombers."The development of the future bombers" is our duty in the new era, and "we need to become the standard maker of this technology, and play the leading role in the future bomber's combat modality," He said.China's new generation H-20, believed to be a stealth strategic bomber similar to the B-2, is under development.