An Afghan air force helicopter made crash landing in southern Helmand province on Saturday and the air force destroyed the chopper after safely rescuing the crew, the Afghan Defense Ministry said on Sunday. 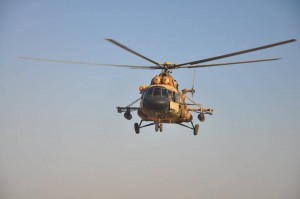 "An Afghan National Army (ANA) Air Force's helicopter when in a supportive flight during an operation made emergency landing in Yakhchal village, Nahri Sarraj district, Helmand province," the ministry said in a statement.

The crew was safely rescued by another army helicopter and was shifted to Shorab Air Base in Helmand, the statement said, adding that the wreckage was destroyed by air force sorties.

Last year, an Afghan army helicopter was destroyed in another similar incident in northern Kunduz province before Taliban reach to the crash site.

The Taliban militants intensified attacks against security forces across the country after they launched a yearly rebel offensive on April 25.