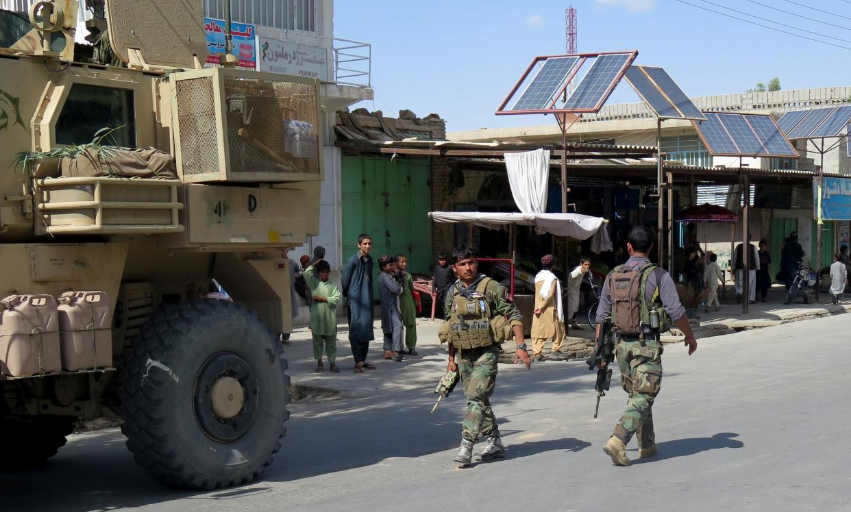 Taliban fighters closed in on another district in Afghanistan on Sunday as officials sought to reassure an increasingly angry public that security would improve.

On Sunday, the insurgents were besieging the governor’s compound in Ajrestan district in Ghazni, south of the capital Kabul, although officials said reinforcements had arrived and were relieving police defending the town.

The fighting in Ghazni, which has long had a heavy Taliban presence, follows several days of fighting in Farah province, on the other side of Afghanistan on the border with Iran where the insurgents came close to overrunning the provincial capital.

General John Nicholson, the top U.S. commander in Afghanistan visited Farah on Saturday with the ministers of the interior and defense and the head of the NDS intelligence service.

“Farah did not fall and Farah will never fall,” he said, calling on the Taliban to accept President Ashraf Ghani’s offer of peace talks. “We will stay with you until we bring this war to a peaceful conclusion,” he said.

He met local officials in the governor’s compound and heard a bitter litany of complaints about the failure of the government to protect the city and the province, where the Taliban control many areas.

“If you want to make Farah better, then please, you should help before there’s an incident,” said Belqis Roshan, a former senator. “We have 10 districts, and apart from the centers, they’re under Taliban rule,” she said.

Reinforcements rushed in from other provinces and repeated strikes by Afghan and U.S. air forces pushed the insurgents back from the city center but bazaars remain deserted and the streets empty.

“People are still worried about the situation,” said Farah resident Abdullah. “The Taliban have a strong presence in almost all districts and are still hiding in some parts of the city.”

As the Taliban have continued the spring offensive they launched last month, heavy fighting has been seen from Badakhshan and Baghlan provinces in the north to Farah in the west and Ghazni and Zabul in the center.

In Ajrestan district in Ghazni, Mohammad Arif Noori, a spokesman for the provincial governor said fresh commando forces had arrived and the Taliban pushed back from the town center.

“Fighting is continuing but the attacks on the district center have been repelled,” he said.

However local officials said the center remained under severe threat and the local governor had fled.

“Since last night, we have lost contact with officials and security forces in Ajrestan. Since then we have had no report on the situation in the district,” said Mansoor Faqiri, a member of the Ghazni provincial council.