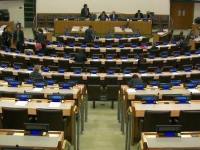 New York (People’s Daily) – An ambassador for a group of African countries took center stage during the 2018 United Nations Disarmament Commission on April 2 to urge other countries to eliminate the threat of nuclear weapons in space while also calling for fair exploration and use of outer space.

Samson Itegboje, Nigeria’s permanent representative to the UN, spoke on behalf of the 54 countries in the African Group to say that all spaces, including outer space, should be free of nuclear weapons since they pose a threat to global peace and mankind’s survival.

“To this end, the African Group emphasizes that outer space, as the common heritage of all mankind, must be explored and used exclusively for peaceful purposes,” Itegboje said. “These activities must also be for the benefit of all nations, irrespective of their level of social, economic or scientific development.”

The African Group emphasized that it is necessary to explore outer space on an equal footing based on the international legal framework formed by the five UN space activities treaties, specifically the Outer Space Treaty of 1967. These guidelines include the non-occupation and peaceful use of outer space as well as the management of countries activities to explore and use outer space, including the exploration of the Moon and other celestial bodies.

In 2016, African countries adopted a list of space policies and strategies for its outer space program in the 2063 African Union agenda.

The African Group also expressed serious concern at the creation of space debris and urged the UN to limit its generation. The group noted that the various challenges surrounding space activities should be addressed in ways that will not impair the progress of space capabilities in developing countries.

The Disarmament Commission is a subsidiary of the General Assembly. It is composed of all UN member states and holds a three-week meeting every spring. As a deliberative body, it has reviewed various issues in the field of disarmament, made recommendations, and follows up relevant decisions and sanctions created by the special UN General Assembly.