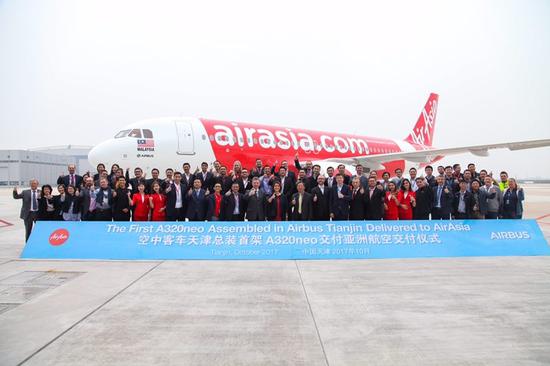 The first A320neo assembled in Airbus Tianjin delivered to AirAsia on October 25, 2017. (Photo provided by Airbus)

An A320neo aircraft, the first assembled at the Airbus Final Assembly Line Asia (FALA) in north China's port city of Tianjin, was delivered to AirAsia Wednesday.

"The delivery of the A320neo is a milestone for our Asia Final Assembly Line, which will help us to meet the robust demand from the customers in China and the Asia-Pacific region," said Eric Chen, president with Airbus Commercial Aircraft China.

The Airbus FALA in Tianjin, inaugurated in 2008, is the third single-aisle aircraft final assembly line location of Airbus worldwide, following Toulouse and Hamburg.

It is also the first Airbus Final Assembly Line outside Europe. To date, about 340 aircraft have been assembled and delivered from Tianjin.

The new A320 aircraft is powered by CFM LEAP-1A and capable of carrying 186 passengers.

"We are very proud to receive the first Airbus A320neo fully assembled in Tianjin. And we would like to congratulate Airbus, as well as the Chinese Government for achieving yet another milestone," said Aireen Omar, CEO with AirAsia.

"China today is one of the world's most important aviation markets, and we are honored to be part of the development and rapid growth."

She added that, as AirAsia is expanding its network and grow the fleet, it is important for the airliner to stay at the forefront of the market.

Based in Kuala Lumpur in Malaysia, AirAsia is Asia's leading low-cost carrier with an airline network of more than 120 destinations across the Asia-Pacific region.

It is also the largest airline customer for the A320 family. It has placed orders for a total of 578 aircraft from Airbus, including 404 A320neo family aircraft.

The A320neo family, the newest series of Airbus single-aisle aircraft, incorporates the latest technology such as new generation engines and sharklets, which contribute to fuel-saving and emission-reduction.

With more than 5,200 orders received from 95 customers worldwide since its launch in 2010, the A320neo family has gained around 60 percent of the market share of its class.

As of this August, the in-service Airbus fleet in Chinese mainland has reached 1,484, including 1,263 A320 Family aircraft.

Over the next 20 years, China will require about 6,000 new aircraft, about 18 percent of total world demand, according to an Airbus forecast.

Along with the growth of its fleet in China, Airbus is expanding its industrial footprint. To date, it has five joint ventures with Chinese partners.

On Sept. 20 this year, Airbus inaugurated its A330 Completion and Delivery Center (CDC) in Tianjin, the first such center for its wide-body aircraft outside Europe.

The center will complete tasks such as cabin installation, painting and flight testing, as well as customer flight acceptance and aircraft delivery, according to Airbus.

"We have set a clear target of making Tianjin as our base in Asia to serve for the region with Chinese partners. Airbus will gain more competitiveness by non-stop innovation," said Chen.