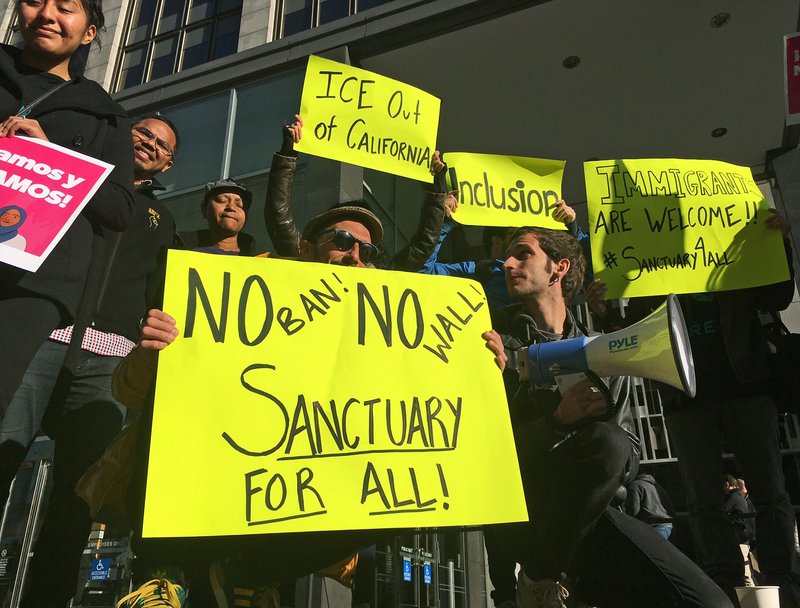 The decision by San Diego County’s all-Republican Board of Supervisors comes amid a growing conservative backlash in California against the Democratic governor’s stance on immigration enforcement.

The region of 3 million residents that borders Mexico joins neighboring Orange County and at least nine other Orange County cities that have passed anti-sanctuary resolutions or voted to support the lawsuit filed last month by President Donald Trump’s administration.

The board voted 3-1, with one member absent. It pledged to file an amicus brief supporting the federal lawsuit at the first available opportunity, chairwoman Kristin Gaspar said. She expects the Trump administration to win and California to appeal, at which point San Diego County would be allowed to file its brief.

The board made the decision in closed session after hearing 45 minutes of public comment. Most of the more than two dozen speakers urged the supervisors not to support the lawsuit.

Gaspar held up a stack of printed emails and letters more than foot high that she said the board had received from residents who want the county to stand up against the state policy. She held up a second stack of only a few inches that she said was correspondence from those opposed to supporting the lawsuit.

Citing the San Diego County Sheriff’s Department, Gaspar said the sanctuary law has allowed 284 criminal suspects to be released instead of handed over to immigration authorities since January. Before the law, San Diego had a close relationship with police, she said.

“San Diego was really a model of excellence before,” Gaspar said. “We were safer before SB54.”

Tuesday’s decision comes a day after the small town of Los Alamitos in neighboring Orange County declared itself legally exempt from the state policy.

The City Council approved the first ordinance of its kind late Monday in a 4-1 vote, which was followed by a peaceful but noisy confrontation with demonstrators on both sides of the issue.

Like San Diego County, the city of 12,000 argues that the federal government — not the state — has authority over immigration. It’s the same argument made by the Trump administration.

Margaret Baker, who lives near the US-Mexico border in San Diego County told officials that backing the lawsuit will “be a stain on your legacy.” She said it will discourage immigrants from reporting crime.

“We see this lawsuit as an attack on our safety and the well-being of our community,” she said.

Luis Reyes said the state law is unconstitutional, and California must do something about illegal immigration before it’s too late.

“We’re looking at something like what is happening in Europe coming this way,” he told the board.

The crowd jeered at comments and snapped fingers of approval but generally the San Diego County meeting was calm and peaceful.

California’s all-Democratic leadership has positioned the state as a national leader in battling the Trump administration, especially on immigration issues.

Government leaders at the state level and in big cities have condemned mass raids and deportation efforts, the president’s call for a border wall with Mexico and Attorney General Jeff Sessions’ “zero tolerance” order to prosecute people caught illegally entering the United States for the first time.

California Gov. Jerry Brown elicited rare praise from Trump last week for pledging to contribute 400 troops to the National Guard’s deployment to the Mexican border. But Brown was clear that California troops will help go after drugs, guns and criminal gangs, not immigrants.