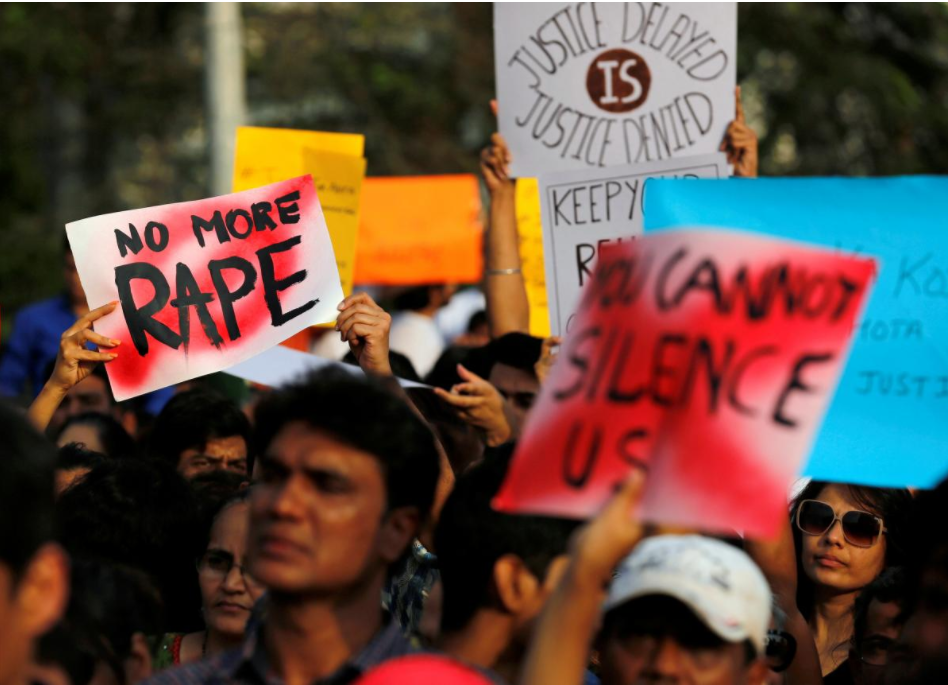 People hold placards as they participate in a protest against the rape of an eight-year-old girl in Kathua near Jammu, and a teenager in Unnao, Uttar Pradesh state, in Mumbai, India, April 15, 2018 (Photo: Reuters)

Days after a lawmaker from India’s ruling party was arrested in connection with a teenager’s rape, a sexual attack on an 11-year-old girl was reported on Sunday in Gujarat, the latest in a string of cases that have sparked protests across the country.

Protests calling for justice were held in several cities, echoing the mass rallies against sexual violence in 2012 and piling pressure on Prime Minister Narendra Modi, who must hold elections by May 2019. Modi has promised to take action.

Activists accuse authorities of failing to protect women and of moving too slowly to investigate and arrest perpetrators.

The protests were fueled in part by the arrest of a lawmaker from the Bharatiya Janata Party last week in connection with the rape of a teenager in the northern state of Uttar Pradesh, which the ruling party governs.

In the southern city of Thiruvananthapuram, protesters formed a human chain, while in Mumbai, hundreds, including film celebrities, called for the death penalty for rapists. In New Delhi they called for rape trials to be completed in six months.

In the western Gujarati city of Surat, where the latest case took place, men and women held a silent candlelight march. Gujarat is Modi’s home state, where he was the Chief Minister from 2001 until he took national office in 2014.

“The body was recovered on April 6 by the side of a highway and, according to a post mortem report, the girl was sexually assaulted and murdered on April 5,” Surat’s police commissioner, Satish Sharma, told Reuters.

He said the victim - who was 11 years old, according to the post-mortem - had not yet been identified and that police from neighboring states have been asked to help find her family.

“We have put our best teams in place with all senior police officials. To nab the criminals we first need to identify the body,” Sharma said.

The post-mortem revealed the girl had been strangled and smothered, with 86 signs of minor injuries, including sexual assault, he said. Some of the injuries were old.

Details have also emerged in a separate case of an eight-year-old Muslim girl belonging to a nomadic tribe that roams the mountains of Jammu and Kashmir who was kidnapped, drugged and held in captivity as eight Hindu men assaulted her.

There had been little progress made in the case until activists stepped up their campaign for an investigation.

“Let’s not pretend that these are all isolated cases and happened out of the blue,” film actor and director Nandita Das said at the Mumbai protest. “We have brought it upon ourselves as a society and we have to find a solution for it.”

The United Nations is among the international bodies that have condemned the problem.

“We are deeply concerned about the prevalence of gender-based violence, including sexual violence against women and girls, which we are witnessing in India,” Yuri Afanasiev, the UN resident coordinator in India, said in a statement last week.