HEADLINE Anti-japanese flyers inside the menus during WWII

Anti-japanese flyers inside the menus during WWII 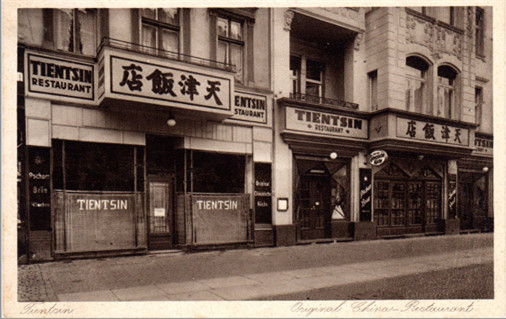 The "Tientsin Restaurant" on a contemporary postcard. (Source: unknown)

Kantstrasse in Charlottenburg, is a Berlin hot spot for Chinese food – even though there are supposedly over four hundred Chinese restaurants in the city as a whole. There are good historical grounds for the Kantstrasse’s enduring reputation: the Tientsin, Berlin’s first “China-Restaurant”, opened here at Kantstrasse 130b in 1923. The Peking had opened two years before in Hamburg, touted by travel guides at the time as Germany’s “first and only” Chinese restaurant.

“Herr Wen”, as the local press called the owner of the Tientsin, had good reason to pick this particular spot for his restaurant: most of the Chinese who came to study in Berlin in the ’20s sublet rooms in bourgeois apartments around the elegant Kantstrasse, explains Dagmar Yu-Dembski, head of the Confucius Institute at the Freie Universität Berlin and author of several books on Sino-German relations. Yu-Dembski’s own family history is inseparable from that of Berlin’s Chinese restaurants: her father, Hak-Ming Yu, took over the Canton at Stuttgarter Platz, one of the first Chinese restaurants to open in post-war Germany, and shortly thereafter started up the Hongkong-Bar, which became a venue for Berlin’s prominent figures in the ’50s.

Hak-Ming Yu was one of the well-born Chinese young men who came to Berlin to study in the 1920s and ’30s and hung out with their compatriots at the Tientsin or the Nanking, depending on their culinary preference. “Students from northern China tended to favour the Tientsin, which served typical northern Chinese dishes,” recounts Yu-Dembski. “The southern Chinese, like my father, went to the Nanking, which served mostly fried rice dishes.” The majority of those students, whose numbers exceeded five hundred (based on the Chinese Student Organization’s 1927 membership list), were enrolled in engineering courses at Berlin’s Technische Hochschule near the Kantstrasse – and could afford to dine at what Yu-Dembski describes as the “very classy” Tientsin. With its white tablecloths and – German – waiters in white tailcoats, the Tientsin kept up with the surrounding bourgeois German restaurants. “Real Chinese” only worked in the kitchen, as the press noted enthusiastically: owner Wen had succeeded in poaching the chef from the Chinese embassy in Berlin. Needless to say, patrons ate with chopsticks there. So German critics raved about this both exclusive and exotic restaurant, whose northern Chinese noodle dishes were described in the June 1925 Berliner Tageblatt as being “aesthetically and digestively suitable for Europeans”.

Even so, most of the Tientsin’s patrons were Asian men – often accompanied by good-looking German women, as the Berliner Tageblatt observed. The Tientsin’s German customers over the years included a great many intellectuals and artists, adds Yu-Dembski. “But in the ’20s the Tientsin was primarily a place for all the Asians in Berlin to meet up: Chinese, Mongols, Indians, Japanese.” That changed with the mounting political tensions between China and Japan. Up to the early 1930s, the Kantstrasse had not only a bunch of Chinese restaurants – already eight of them by 1931 – but also two Japanese establishments. In April 1932 both Japanese restaurants were attacked by a group of young Chinese, who smashed in the windows with cobblestones and left behind flyers inveighing against the “thieving Japanese pack”.

Especially after the Manchurian Incident in the autumn of 1931 and the subsequent Japanese invasion, some of the Chinese students in Berlin engaged in political protest. In interviews with Chinese people who lived in Berlin during the Weimar Republic and the Nazi period, Dagmar Yu-Dembski found that “on the whole they hardly took any interest in German politics, they were a lot more interested in the political situation back home in China”. Most of the Chinese students, nearly all of them from intellectual and more or less affluent families, were “patriots”. Some joined forces to form a small group of activists that put out an anti-Japanese newspaper in Chinese called Kang-Ti. The paper was distributed via Chinese restaurants. “Especially at the Tientsin, guests repeatedly found anti-Japanese flyers inserted in the menus,” says Yu-Dembski. Some Chinese restaurants wouldn’t even let Japanese customers in.

The writer Anna Seghers, a famous regular at the Tientsin until she had to flee Nazi Germany, must have noticed this anti-Japanese policy. Inspired by the political debates conducted at the Tientsin, Seghers, who was a member of the German Communist Party herself, had the anti-fascist Chinese characters in her 1932 internationalist novel Die Gefährten (“The Comrades”) meet in a restaurant with the following notice on the door: “Japanese and English guests are kindly requested to note that your safety cannot be guaranteed in this establishment.”

As for the other Chinese restaurants that opened along the Kantstrasse in the 1920s after the Tientsin, none survived World War II. The restaurateurs were harassed by the Nazis; like many other Chinese expats who stayed out the war in Berlin, they were investigated on trumped-up charges of “crimes against the wartime economy”, recounts Yu-Dembski. And the Tientsin was eventually destroyed by an aerial bombardment.

The end of the war was also “zero hour” for Chinese gastronomy in Berlin. The restaurants that popped up after the war were no longer hubs of intellectual and intercultural exchange. Many young Chinese people who had studied in Berlin heeded Mao’s call and left Germany to return home in the late ’40s and early ’50s. Furthermore, German society had been ravaged by the persecution of the Jews and dissenters under the National Socialist regime: after 1945 there were hardly any forums for intellectual exchange between Chinese students and German artists and intellectuals like the ones that had existed before the Nazi takeover. Anna Seghers was one of the few Jewish intellectuals to return to Germany after the war (first to West Berlin (1947), then East Berlin (1950) – Translator’s note).

After 1947 the Chinese restaurants in Berlin drew predominantly German customers. That had an impact on the menus, too: the Chinese dishes were adapted to the German palate. Besides, Chinese restaurants had to cope with shortages after the war: soy sauce, for example, was not to be had in post-war Germany, so the chefs fell back on a popular German product that looks and tastes like soy sauce: “To this day I still have the aroma of Maggi-Würze in my nose when I think back on my father coming home at night after a long day at the restaurant,” recalls Yu-Dembski.

And to this day, as a result, Chinese restaurants in Germany have to contend with a widespread but unfounded preconception that they somehow lack authenticity. And yet Chinese gastronomy nowadays especially in Berlin is extremely diverse – and not only in the Kantstrasse, where it all began.