HEADLINE Arab summit kicks off in Saudi Arabia, the lowest profile ever

Arab summit kicks off in Saudi Arabia, the lowest profile ever 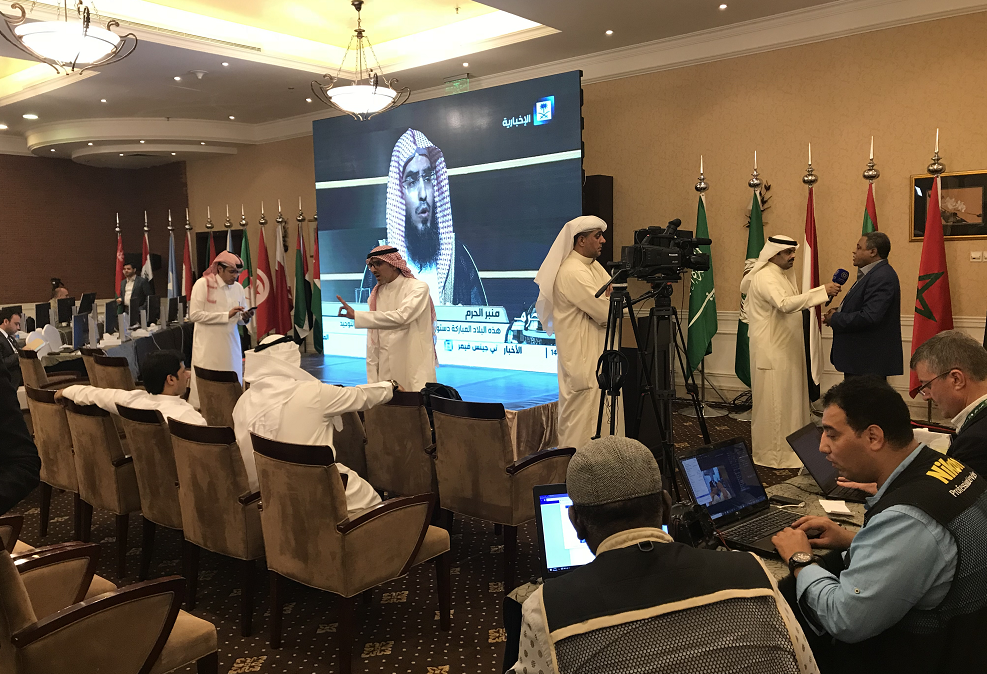 Dammam (People's Daily) - The 29th Arab League Summit kicks off in the Saudi Arabian city of Dammam on Sunday. Probably due to the heightened security situation in the region, the summit was low profile.

Early Saturday morning, the People’s Daily reporter’s flight landed at the Dammam King Fahd International Airport, which is said to be the largest in the world in terms of its floor area. Dammam is the largest city in east Saudi Arabia, serving as the center of the Saudi oil industry and the largest seaport in the Persian Gulf.

Compared with other summits and high-level international conferences, this year’s summit is unusual in that no publicity or even notice could be seen at the airport and city landmarks. You could see the flags of the Arab League member states and the Arab League logo near the convention site, King Abdulaziz Center for World Culture, and along Prince Turki Street, on which the information center is located. All of the places are far away from the downtown area.

The press center is located in Mercure hotel along the Persian Gulf. Armored vehicles from the police, mounted with heavy machine guns, parked at the main entrance, reminding pedestrians of the big event taking place within. After a strict security check, the reporter walked into the lobby of the hotel. The facilities were complete and cutting-edge. A large screen in the center scrolls live footage from the conference site and the airport VIP zone. To assist journalists, the organizers prepared nearly 100 brand-new desktop workstations, and 10 exclusive interview areas. A variety of food and beverage are placed in the corner of the main hall.

A staff member in charge of media services told People’s Daily that the journalists who showed up at the press center were invited by the Saudi Arabian Ministry of Culture and Information, with special approval from the Saudi Arabian Royal Ceremony Bureau. At the beginning, the People’s Daily correspondent tried to apply for the summit online, but ended up finding no relevant information on either the official website of the Arab League or the homepage of Saudi government departments.

The most low-key part of the summit was the address of the convention site. Saudi Arabia did not publicly mention Dammam until last week. Even in early March, Ahmed Abu Gheit, Arab League Secretary General, and his Saudi colleague referred to the summit as the “Riyadh summit”. Some sensitive journalists from Western and other Middle Eastern countries suspected that Saudi Arabia had been intercepting Yemeni Houthi missiles to Riyadh since April, and believes that Dammam is farther away from the launch site and more convenient to defend. However, as of now, the speculation has not been confirmed by Saudi officials.

Coincidentally, on Saturday morning, the Saudi side specially invited journalists and some of the guests of the summit to observe the live-fire shooting exercises of the“2018 Gulf Shield” multinational joint exercises. The annual exercises officially began last Sunday and will last a month. In addition to the Saudi armed forces, more than 20 countries are taking part in the exercises.

According to Saudi Arabia’s Middle East Daily, the draft resolution of this year’s summit was approved by the foreign ministers of the League of Arab States at the preparatory meeting in Riyadh, and will re-endorse the legitimacy of Yemeni exiled President Hardy, and reject the interference of Iran and Turkey in the internal affairs of Arab countries.

The leaders of the Arab countries or their representatives have also been keeping a low profile. Egyptian President Sisi did not confirm his attendance until the day before his departure. According to media reports in the Middle East, in order to avoid intermediaries, the invitation letters for most of the VIPs were hand-carried by the Saudi Arabian representatives and ambassadors, except for Qatar. The country, blamed for “supporting terrorism” by Saudi Arabia last year, currently has no diplomatic relations with the kingdom, getting the invitation letter personally from the Secretary-General of the Arab League.