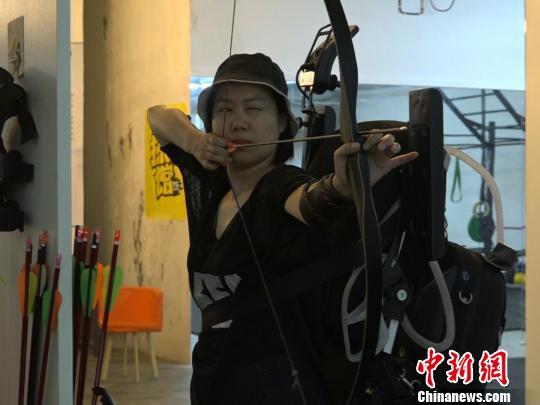 Two years ago, Yuan Min spent most of her time sitting in an office cubicle. Now, she spends five days a week at an archery range, where she once dreamed of competing in the Olympics for Team China, China News Service reported.

Although her speech is slow and slurred, her ever-present smile hasn’t changed, revealing the joy she receives from the sport.

According to China News Service, it was a friend who introduced Yuan archery. The first time she held a bow and arrow, she knew she had found her calling. After work, Yuan would go to an indoor range and practice upwards of four hours every day.

In one day, Yuan fell to the ground on two separate occasions while walking. She later went to see a doctor who diagnosed her with Amyotrophic Lateral Sclerosis (ALS), more commonly known as Lou Gehrig’s disease, an incurable neurological condition where the brain stops sending neurons to muscles that control voluntary movement. Eventually the muscles will deteriorate, leading to the complete immobilization of the body. The average life expectancy for those suffering from ALS is three to five years.

“Although the early symptoms weren’t that noticeable, I was somewhat prepared after the diagnosis,” Yuan said. “I understood that the disease doesn’t take long to develop, so I decided to enter competition.”

Early on, she dreamed of competing in the Special Olympics.

“My muscles have weakened faster than I imagined. Now, I can only pull half of the weight that I once could.”  And no matter how hard she tries, the only thing that keeps pulling further away from her is Olympic glory.

Yuan still practices at the archery range and said, “It’s a very positive sport and I have the experience to prove it.”