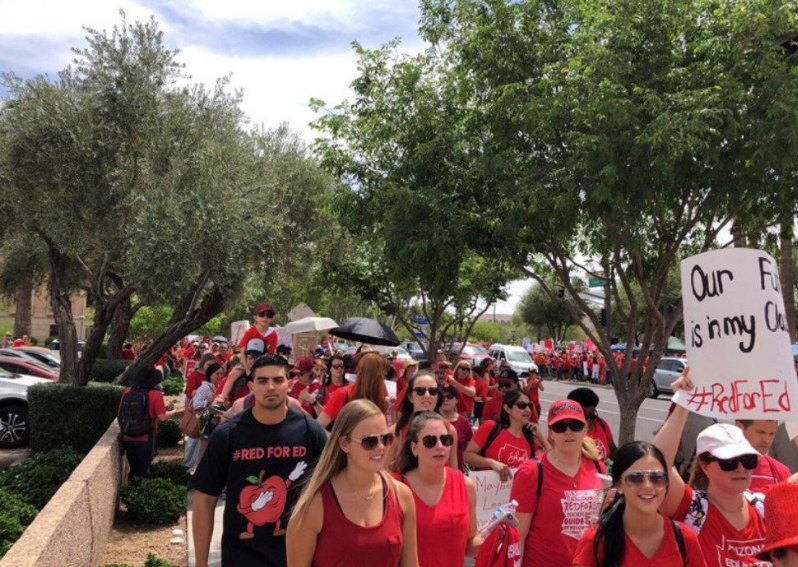 Participants take part in a march in Phoenix, Arizona, US, April 30, 2018 in this picture obtained from social media. (Photo: Reuters)

A walkout by Arizona teachers demanding higher pay and school funding stretched to a fourth day on Tuesday as state lawmakers hashed out a budget package to end the latest in a string of statewide protests by US educators.

Arizona’s protests have kept the vast majority of its 1.1 million school children out of classrooms since teachers walked off the job Thursday and school districts warned the walkout was likely to continue through Wednesday. It follows similar actions by teachers in West Virginia, Kentucky and Oklahoma that marked the first statewide US teacher work stoppages since the 1990s - all in states where Republicans dominate the legislature.

The unprecedented wave of labor activism by teachers has been fueled by demands that states reverse salary and funding constraints imposed when tax revenues ran short during the 18-month recession that ended in June 2009.

Conservative groups such as Phoenix’s Goldwater Institute think tank have threatened to sue school districts over failing to stop the “illegal strike.”

Hundreds of red-clad Arizona teachers descended on the capitol in Phoenix, chanting “Red For Ed” - the name of their protest movement. Many signed up to speak to the Republican-controlled legislature to try to break what organizers called “legislative inaction” at the capitol.

Noah Karvelis, a music teacher and organizer of the grassroots Arizona Educators United, said the group was seeing movement on some of its demands.

“We’ll be down there today fighting so we can get the best deal for our students as possible,” Karvelis said in a phone interview.

Organizers asked the state’s tens of thousands of #RedforEd supporters to begin local community actions such as “bridge takeovers” and “standouts” to promote their cause.

Teachers have demanded higher pay for support staff and teachers and a promise that Arizona’s legislators will enact no new tax cuts until the state’s per-student funding level is brought up to the national average. Arizona’s teacher salaries rank among the lowest in the country.

Arizona Governor Doug Ducey, a Republican, last week announced a deal with legislative leaders to raise teachers’ pay 20 percent by 2020, along with $371 million in new funding over the next five years for improvements in school infrastructure, new school buses and upgrades to technology and curriculum.

Teacher union officials expressed skepticism over Ducey’s plan, saying it failed to address all their concerns and was unclear on how spending increases would be funded.