HEADLINE As Trump heads to Davos, survey points to rising risk of war

As Trump heads to Davos, survey points to rising risk of war 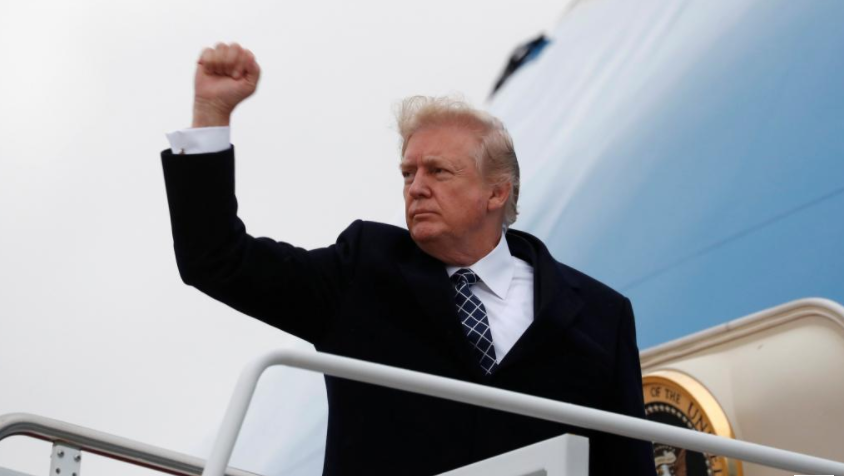 US President Donald Trump pumps his fist as he boards Air Force One upon departure from Joint Base Andrews in Maryland, US, January 12, 2018. Photo: REUTERS/Kevin Lamarque

The risk of political and economic confrontations between major powers, including outright military conflicts, has risen sharply, according to a survey released by the World Economic Forum (WEF) days before its annual gathering in Davos.

But most remarkable was the surge in geopolitical concerns after a year of escalating rhetoric between US President Donald Trump and North Korean leader Kim Jong Un that has arguably brought the world closer to a nuclear conflict than it has been in decades.

Trump is due to give a speech on the closing day of the WEF, an annual event in the Swiss Alps which runs from Jan. 23-26 and will attract 70 heads of state and government, as well as celebrities, CEOs and top bankers.

The survey of nearly 1,000 experts from government, business, academia and non-governmental organizations showed 93 percent expect a worsening of political or economic confrontations between major powers in 2018, including 40 percent who believe those risks have increased significantly.

Some 79 percent see a heightened risk of state-on-state military conflict. In addition to the threat of a conflict on the Korean peninsula, the report pointed to the risk of new military confrontations in the Middle East.

It cited a rise in “charismatic strongman politics” across the world and said political, economic and environmental risks were being exacerbated by a decline in support for rules-based multilateralism.

The report pointed to Trump’s decisions to withdraw from the Paris climate accord and the TPP trade agreement and his threat to pull out of a deal between Western powers and Iran designed to curb its nuclear program.

“The risks we are trying to grapple with here require multilateral solutions but we are moving in the other direction,” said John Drzik, president of global risk and digital at the consultancy Marsh, which helped compile the report.

While geopolitical worries rose sharply, the environment topped the list of concerns, with extreme weather events seen as the single most prominent risk in 2018 after a year of unusually frequent Atlantic storms, including Hurricane Maria, which devastated Puerto Rico.

With global growth recovering, concerns about the economy were down sharply. Still, the report described income inequality as a “corrosive problem” in many countries and warned against complacency over the economic environment given high debt levels, low savings rates and inadequate pension provisions.

“A widening economic recovery presents us with an opportunity that we cannot afford to squander, to tackle the fractures that we have allowed to weaken the world’s institutions, societies and environment,” said Klaus Schwab, founder and executive chairman of the WEF.

“We must take seriously the risk of a global systems breakdown.”