HEADLINE As US response looms, Russia and Syria urge inspection of attack site

As US response looms, Russia and Syria urge inspection of attack site 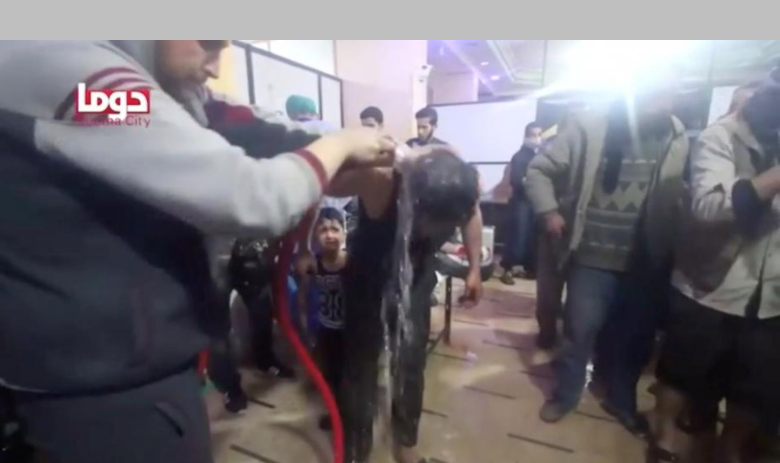 A man is washed following alleged chemical weapons attack, in what is said to be Douma, Syria in this still image from video obtained by Reuters on April 8, 2018 (Photo: Reuters)

President Bashar al-Assad’s government has invited international inspectors to send a team to Syria to investigate an alleged chemical attack in the town of Douma in a move apparently aimed at averting possible Western military action over the incident.

U.S. President Donald Trump on Monday warned of a quick, forceful response once responsibility was established. The White House said Trump will now not travel on Friday to the Summit of the Americas in Peru so that he can focus on the crisis.

At least 60 people were killed and more than 1,000 injured in Saturday’s suspected attack on Douma, then still occupied by rebel forces, according to a Syrian relief group.

The Syrian government and Russia said there was no evidence that a gas attack had taken place and the claim was bogus.

But the incident has thrust Syria’s seven-year-old conflict back to the forefront of international concern.

Adding to the volatile situation, Iran, Assad’s main ally along with Russia, threatened to respond to an air strike on a Syrian military base on Monday that Tehran, Damascus and Moscow have blamed on Israel.

Meanwhile on the ground, thousands of militants and their families arrived in rebel-held northwestern Syria after surrendering Douma to government forces. The evacuation deal restores Assad’s control over the entire eastern Ghouta - formerly the biggest rebel bastion near Damascus.

The Hague-based Organisation for the Prohibition of Chemical Weapons (OPCW) is already at work trying to establish what exactly took place in Douma.

But whether a team would try to get there was unclear. OPCW inspectors have been attacked on two previous missions to the sites of chemical weapons attacks in Syria.

“Syria is keen on cooperating with the OPCW to uncover the truth behind the allegations that some Western sides have been advertising to justify their aggressive intentions,” state news agency SANA said, quoting an official Foreign Ministry source.

In Moscow, Russian Foreign Minister Sergei Lavrov said the Kremlin would submit a resolution to the U.N. Security Council proposing that the OPCW investigate the alleged attack.

Russian Deputy Foreign Minister Mikhail Bogdanov said there was no threat of the situation in Syria resulting in a military clash between Russia and the United States.

TASS news agency quoted Bogdanov as saying Russia and U.S. officials had “working contacts” over Syria and he believed common sense would prevail.

On Monday, Trump told a meeting of military leaders and national security advisers in Washington that he would take a decision that night or shortly after on a response, and that the United States had “a lot of options militarily” on Syria.

The United States has requested the U.N. Security Council vote at 3 p.m. (1900 GMT) on Tuesday on a proposal for a new inquiry on the use of chemical weapons in Syria, diplomats said. The resolution was likely to be vetoed by Syrian ally Russia.

At a meeting on Monday, U.S. Ambassador to the United Nations Nikki Haley said Washington would respond to the suspected attack whether the Security Council acted or not.

“This is basically a diplomatic set-up,” said Richard Gowan, a U.N. expert at the European Council on Foreign Relations.

“Russia will inevitably veto the U.S. resolution criticising Assad, and Washington will use this to justify military strikes,” he said. “A breakdown at the U.N. will also make it easier for France to justify strikes.”

France said it would respond if it was proven that Assad’s forces carried out the attack. Any riposte would most likely be in coordination with the United States, government aides said.

The British government is also discussing military intervention with its allies in Syria in response to the alleged attack. Prime Minister Theresa May will talk to Trump later on Tuesday.

“That kind of atrocity is not acceptable,” International Development Secretary Penny Mordaunt said. “My prime concern is that we do not have a repeat of those appalling atrocities, and that we are doing everything we can to protect men women and children who are targeted.”

Russian U.N. Ambassador Vassily Nebenzia accused the United States, France and Britain of stoking international tensions by engaging in a “confrontational policy against Russia and Syria”.

“Russia is being unpardonably threatened. The tone with which this is being done has gone beyond the threshold of what is acceptable, even during the Cold War.”

Initial U.S. assessments have been unable to determine conclusively what materials were used in the attack and could not say with certainty that Assad’s forces were behind it.

Trump said, however, that Washington was “getting more clarity” on who was responsible.

A previous joint inquiry of the United Nations and the OPCW had found the Syrian government used the nerve agent sarin in an attack in April 2017, and had also several times used chlorine as a weapon. Damascus blamed Islamic State militants for mustard gas use.

The suspected chemical attack came at the end of one of the deadliest Syrian government offensives of the war, with an estimated 1,700 civilians killed in eastern Ghouta in air and artillery bombardments.

Despite the international revulsion over the chemical weapons attacks, the death toll from such incidents is in the dozens, a fraction of the hundreds of thousands of combatants and civilians killed since an uprising against Assad’s rule broke out in March 2011.

The deal over the rebel evacuation of Douma took effect on Sunday, hours after medical aid groups reported the suspected chemical attack

Sixty-seven buses carrying hundreds of fighters, along with family members and other civilians who did not wish to come back under Assad’s rule, reached opposition areas near

Aleppo on Tuesday, the Syrian Observatory for Human Rights said.

As part of the surrender deal, the Jaish al-Islam group that controlled the town released scores of people it had been holding.

Jaish al-Islam’s departure will bring to an end the opposition presence in eastern Ghouta, giving Assad’ his biggest battlefield victory since late 2016, when he took back Aleppo, and underlining his unassailable position in the war.