At least 3 killed in helicopter crash into California home – reports 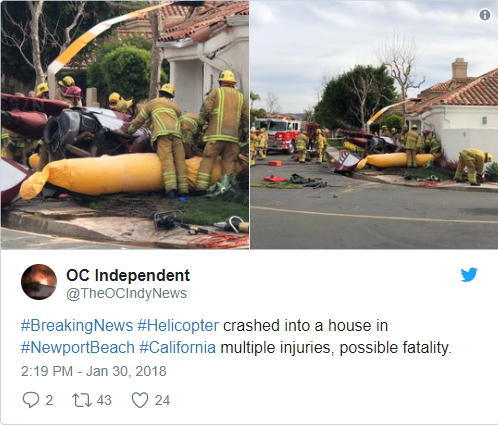 Authorities say three people are dead after a small helicopter crashed into a home near a Southern California airport.

Two other people were injured when the Robinson R44 smashed into the side of the home in Newport Beach at about 1:45 p.m. Tuesday.

Newport Beach fire Capt. Chip Duncan says it’s unclear whether the three people who were killed were on board the four-seat chopper.

An eyewitness tells KCAL-TV that he saw the pilot lying injured but alive on the grass and there were three other people inside the wreckage.

There was no fire and it’s unclear whether anybody was in the home.

The Federal Aviation Administration says the helicopter had taken off from John Wayne Airport. The airport is about a mile from the crash site.