At least 48 people died when a bus tumbled down a cliff onto a rocky beach Tuesday along a narrow stretch of highway known as the "Devil's Curve," Peruvian police and fire officials said.

The bus carrying 57 people was headed to Peru's capital when it was struck by a tractor trailer shortly before noon and plunged down the slope, said Claudia Espinoza with Peru's voluntary firefighter brigade.

The blue bus came to rest upside down on a strip of shore next to the Pacific, the lifeless bodies of passengers strewn among the rocks. 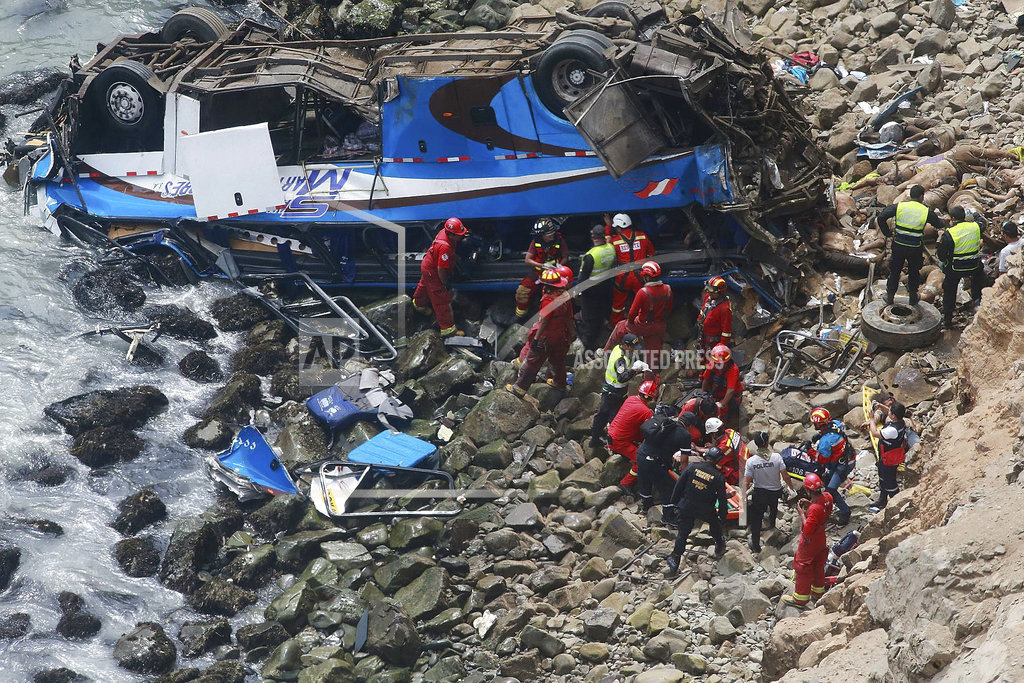 In this photo provided by the government news agency Andina, firemen recover bodies from a bus that fell off a cliff after it was hit by a tractor-trailer rig, in Pasamayo, Peru, Tuesday, Jan 2, 2018. A Peruvian police official says at least 25 people died, and that there were more than 50 people on the bus. (Vidal Tarky, Andina News Agency via AP)

"It's very sad for us as a country to suffer an accident of this magnitude," Peruvian President Pedro Pablo Kuczynski said in a statement.

Rescuers had to struggle to rescue survivors and recover the dead from the hard-to-reach area in Pasamayo, about 70 kilometers (43 miles) north of Lima.

Transportation Minister Bruno Giuffra said initial reports indicated both vehicles involved were traveling at a high rate of speed at the time of the crash. Calls by The Associated Press to the company that owns the bus were not immediately returned.

As rescue operations continued late into the night, authorities announced a suspect had been detained for allegedly robbing belongings of victims.

Traffic accidents are common along Peru's roadways, with more than 2,600 people killed in 2016. More than three dozen died when three buses and a truck collided in 2015 on the main costal highway. Twenty people were killed in November when a bus plunged off a bridge into a river in the southern Andes.

The nation's deadliest traffic crash on record happened in 2013 when a makeshift bus carrying 51 Quechua Indians back from a party in southeastern Peru fell off a cliff into a river, killing everyone on board.

Espinoza said the passengers in Tuesday's crash included many returning to Lima after celebrating the New Year's holiday with family outside the city.

The highway is known as the "Devil's Curve" because it is narrow, frequently shrouded in mist and curves along a cliff that has seen numerous accidents. Police said the bus fell an estimated 80 meters (262 feet).

Miguel Sidia, a transportation expert in Peru, said that while road conditions in the Andean nation have improved in recent years, lack of driver education and little enforcement of road rules still lead to many fatalities each year.

He called on authorities to immediately conduct studies into building a new highway farther from the cliff where the accident occurred.

"As a Peruvian, it's shameful," he said.