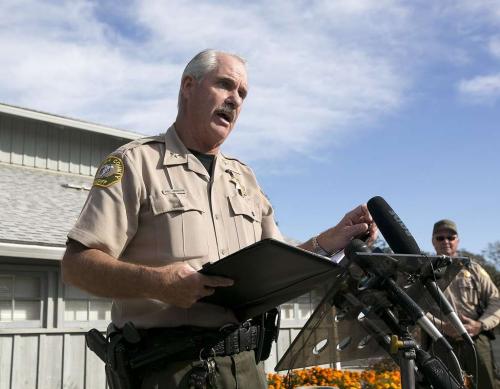 At least five were killed, including the suspect, in a shooting near an elementary school Tuesday morning in Rancho Tehama, a rural and small community of California, about 194 km north of the state capital Sacramento.
Tehama County Assistant Sheriff Phil Johnston said Tuesday evening at a press conference showed live online that the tragedy happened around 8:00 a.m. (1600 GMT) Tuesday, leaving five dead and 10 wounded, including two children.
According to the local Redding Record Searchlight newspaper, the fatal incident stemmed from a domestic violence, and the murderer drove out of home after a quarrel in the morning, then shot at people along street.
Johnston confirmed to reporters that the shooter picked up targets randomly, leaving several shooting scenes and multiple victims. He fired multiple shots at the elementary school, which was his third stop.
Johnston said police officials heard the shots near the school and immediately went there and locked it down. The shooter, identified by the Sacramento Bee newspaper as 43-year-old Kevin Janson Neal, found he could not get into the school, then shot 20 to 30 rounds at the school.
Johnston said the shooter was at the school for six minutes, then he drove off and continued to shoot at people in various parts of the community, including at a pickup with a woman and two kids inside, who were injured.
Johnston revealed that two deputies arrived at the scene saw Neal shooting at the pickup, then exchanged fire with him before killing him in his car, where they found a semiautomatic rifle and two handguns.
Johnston, who called the incident a "bizarre and murderous rampage," said the motive for the shooting "looks like a guy trying to get even with his neighbor."
Brian Flint, a young man, told the Redding Record Searchlight earlier that he knew the suspect, who was a known felon and often harassed him and his neighbors.
Flint said in a video clip posted online that he got a call in the morning that his roommate was killed, his truck had been stolen, and his neighbor was identified as the gunman.
"The crazy thing is that the neighbor has been shooting a lot of bullets lately, hundreds of rounds, large magazines," Flint said sadly. "We made it aware that this guy is crazy and he's been threatening us." There are 1,485 residents living in the community, where report said many people have guns.

Local and national politicians responded to the bloody incident at the first time after Tuesday's fatal shooting, including U.S. Vice President Mike Pence.
"Saddened to hear of the shooting in N. California, the loss of life & injuries, including innocent children," Pence wrote on Twitter. "We commend the effort of courageous law enforcement. We'll continue to monitor the situation & provide federal support, as we pray for comfort & healing for all impacted."
California Governor Jerry Brown said in a statement Tuesday afternoon on his website that he was "saddened to hear about today's violence in Tehama County, which shockingly involved schoolchildren."
"We offer our condolences to the families who lost loved ones and unite with all Californians in grief," the statement reads.