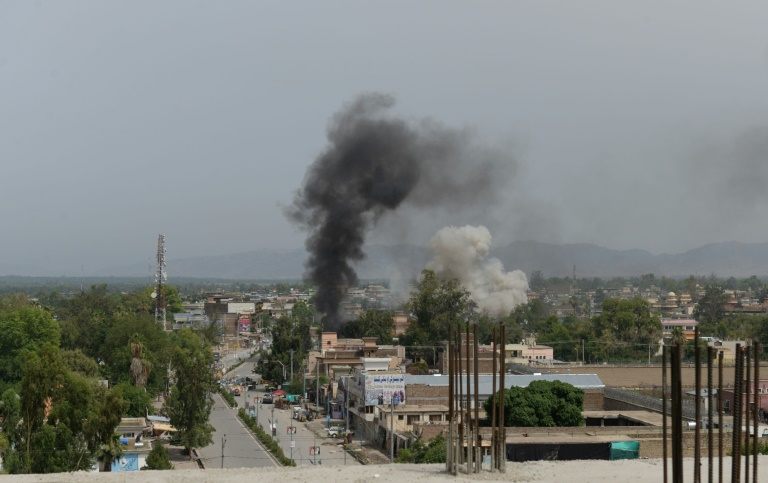 Smoke rises from a building during an ongoing attack in Jalalabad (Photo: AFP)

At least nine people were killed and more than 30 injured when militants detonated bombs and stormed a government building Sunday in an hours-long attack in an eastern Afghan city, officials said.

The assault in the eastern city of Jalalabad was the latest deadly violence to strike Afghanistan as militant groups step up attacks and US-backed Afghan forces intensify air strikes and ground offensives.

It began around 12.50 pm (0820 GMT) when the militants detonated a car bomb at the entrance to the city finance department, "opening the way for a number of armed attackers to enter the building", Nangarhar provincial governor's spokesman Attaullah Khogyani told AFP.

Terrified employees flung themselves from windows to escape as security forces battled the attackers for more than four hours, before all four of them were killed, Khogyani said.

Earlier, he said there had been two explosions. He later said the heavily-armed attackers were also carrying grenades.

"Around noon a big boom shook our building," one employee, Qaisar, said.

"I then saw at least two armed attackers entering the building. My friends ran to hide and I jumped from a window," he told AFP from a Jalalabad hospital, where he was receiving treatment for a broken arm and leg.

Abdullah Raqibi, the finance department director, said all employees had been evacuated. "Unfortunately we lost three staff. They were killed in the blast that happened at the entrance," he said.

The body of a policeman and eight civilians, including the three finance department employees, along with 36 wounded people had been brought to hospitals in Jalalabad, said Najibullah Kamawal, director of the city health department.

There was no immediate claim of responsibility for the attack. The UN tweeted that it will investigate the reports of civilian casualties, which are prohibited under international law.

Jalalabad is the capital of restive Nangarhar, which borders Pakistan. Some areas of the province are a stronghold of the Islamic State group but Taliban fighters are also active there.

April saw a series of attacks across the country targeting voter registration centres as Afghanistan gears up for long-delayed legislative elections due in October.

The Taliban and IS have made clear their intention of disrupting the elections. Officials are concerned that a low voter turnout will undermine the credibility of the poll.

The Taliban recently launched their annual spring offensive, in an apparent rejection of a peace overture by the Afghan government.

Operation Al Khandaq will target US forces and "their intelligence agents" as well as their "internal supporters", a Taliban statement said in late April.

But the Islamic State group has also stepped up attacks in recent months, particularly in Kabul.

Nine journalists, including AFP's chief photographer in Kabul Shah Marai, were among 25 people killed in a double suicide blast claimed by IS in the capital on April 30.

Kabul has become one of the deadliest places in the country for civilians as security forces struggle to keep the militants at bay following the withdrawal of NATO combat forces at the end of 2014.