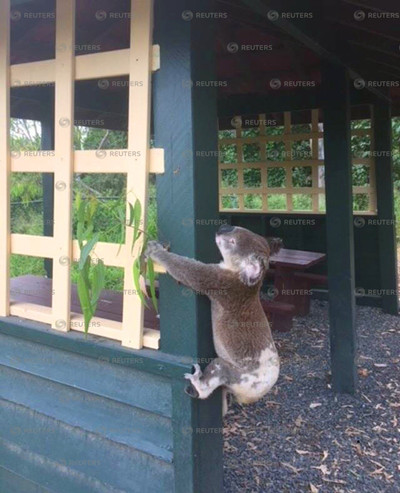 An autopsy is being carried out on a koala that was found nailed to a wooden gazebo post north of Brisbane, capital of Australia's Queensland state, local media reported Friday.

The koala was most likely hit by a car but tests have not yet determined whether it was alive or dead when it was found screwed onto the post through its paws earlier in the week, SBS News reported.

It would be difficult to trace whoever is responsible for the "sickening" act against the iconic Australian animal without any surveillance cameras in the area, koala rescuer Murray Chambers was quoted as saying.

"There must be something wrong upstairs," he said.

A picture of the koala has been posted on the Facebook page of the Koala Rescue Queensland non-profit bear welfare group, appealing for any information about the incident, ABC News reported.

The post was shared more than 1,000 times and "sparked outrage on social media".

Animal welfare group RSPCA is carrying out the autopsy on the animal and police may investigate the case when test results are out.

Stronger penalties for animal cruelty were needed against such a behavior, Chambers' colleague Ray Chambers was quoted as saying.