By Xie Rongbin and Qu Xiangyu 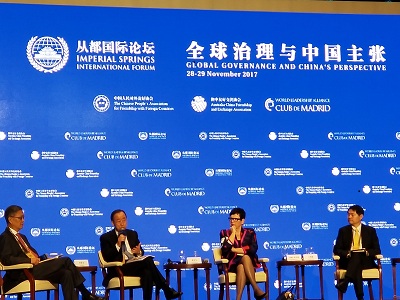 Speaking at the 2017 Imperial Springs International Forum in Guangzhou, south China’s Guangdong Province, Ban said Trump is “running counter to the natural tendency of globalization” by pulling back from global governance.

“197 countries throughout the world have signed the Paris climate accord, including Syria and North Korea, a country that has always been accused of breaking International rules,” Ban said, adding that a US exit from the deal was inconceivable.

Ban said that the US would have become a superpower earlier than 1930 if it had not adopted an “isolationist” policy.

“President Trump should learn from history that globalization is a natural tendency.”

Ban admitted that politicians are to some extent hostages of public opinion, adding that the public may turn to nationalism easier than before because of challenges globalization imposes on their domestic affairs.

On reforms to the UN, Ban said international mechanisms should be made more representative and transparent.