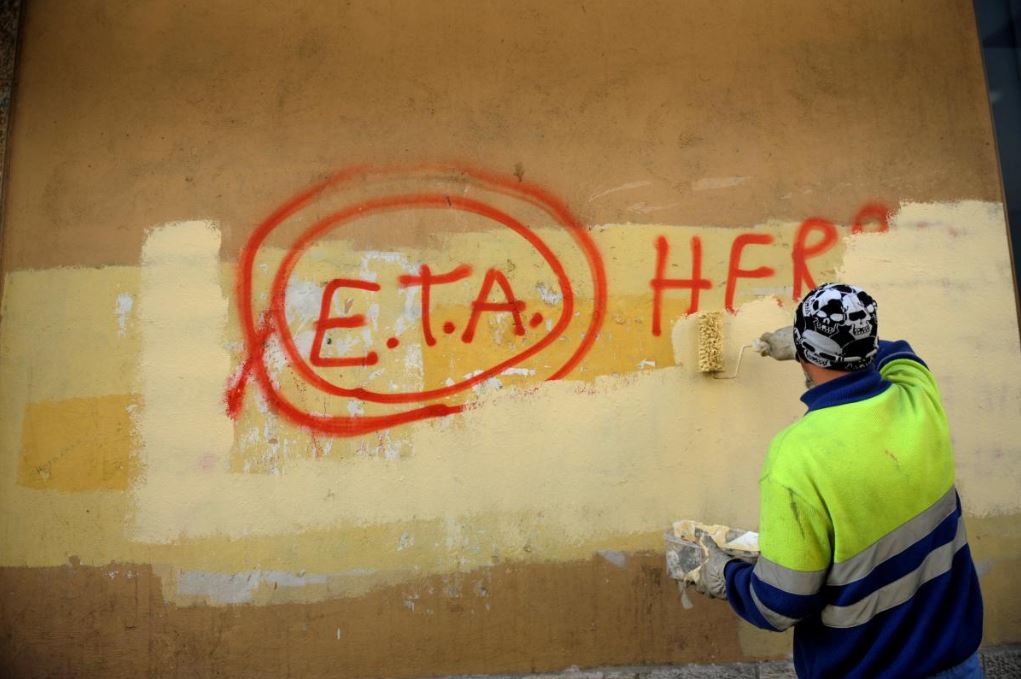 A municipal worker paints over graffiti reading "ETA, The People Are With You" in Guernica, Spain, October 21, 2011, the day after Basque separatist group ETA announced a definitive cessation of armed activity. (File photo: Reuters)

Madrid (People's Daily) - The Basque separatist group Euskadi Ta Askatasuna (ETA), which means Basque Homeland and Liberty, announced it is disbanding on May 3 after nearly 60 years in operation.

The group issued a statement that it has put an end to its political activities and completely dismantled all of its structures. The statement also mentioned it “will no longer express political positions, promote initiatives or interact with other actors.”

This historic declaration has put an end to the terrorist organization, which started in 1959. During its decades-long campaign for independence from Spain, the group killed at least 853 people and injured thousands more. The organization also has a long history of kidnapping, issuing threats, and torturing people.

The Spanish and French governments eventually took a rigid stance on the organization and managed to arrest some of its core leaders in the last decade. More than 300 ETA members have been sent to prison in various parts of Spain, and some key members have fled overseas. Under strong pressure, in October 2011, the ETA announced a permanent ceasefire. In April 2017, the group declared that it had fully disarmed its members.

Even with the dissolution in place, some are calling for more investigations on nearly half of the organization’s estimated death count while others believe that several issues need to be resolved before true peace can be established.

The Spanish government said it will continue to pursue members of the ETA, despite its self-declared dissolution.

“ETA has been defeated due to the strength of the rule of law and Spanish democracy,” Spanish Prime Minister Mariano Rajoy said on Thursday. “Whatever it does, it will not find impunity for its crimes. The government is with the law, the state security forces and the victims.”